On the Road with Ricardo and Cars That Think

Fans of science fiction are accustomed to seeing intelligent vehicles making life's everyday tasks easier and more efficient. But at Ricardo, a global, multi-industry engineering provider of technology, product innovation and strategic consulting, intelligent vehicles are all in a day's work. According to Chris Domin, Ricardo's Chief Engineer for Connected Vehicle and Autonomous Systems, coming up with innovative solutions to customers' problems is what his company does best. "I have a dual role," he said. "I'm a hands-on technologist working with engineers on the day-to-day work of various programs. The other focus is on business development. I talk to prospective clients and offer solutions, whether it's a service or a product. I get to be part of continually moving the company toward the leading edge of innovation."

Innovation is in Ricardo's DNA. The company was founded in the United Kingdom in 1915 and was first noted for the design of a revolutionary engine used in tanks, trains and generators. Among many breakthroughs since, the company is credited with the design of the first diesel production passenger car in 1935 and the Teledyne Continental engine for the Voyager, the first aircraft to fly around the world non-stop without refueling, in 1986. Today, Ricardo provides clients worldwide with strategic consulting and engineering expertise, including vehicle systems integration, controls and electronics, hardware and software development, innovative driveline and transmission systems, and gasoline, diesel, hybrid and fuel-cell powertrain technologies. Ricardo's United States headquarters is located in Van Buren Township, Michigan.

Domin says his work with the company focuses on telematics, wireless technologies, and controls and electronics to improve vehicle efficiency in passenger and heavy-duty vehicles. And at the core of all of it is copper. Domin says, "This technology relies on a number of different components, and copper is critical because it's the glue that ties it all together." 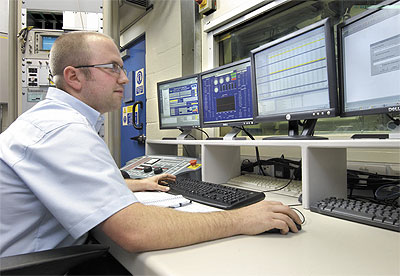 Ricardo engineers come from a wide variety of disciplines

Sentience Eco-Driving - Letting Your Car Do the Thinking

One of Ricardo's recent innovations is already on the road. The Sentience intelligent advanced hybrid system, also called Sentience Eco-Driving, is one of the areas where Chris Domin is focused, developing in-vehicle electronic components that tell the vehicle how to anticipate upcoming road conditions including hills, intersections, traffic lights, speed limits, and the amount of traffic congestion. From the average commuter's perspective, if you could predict road conditions ahead, you could drive more efficiently by braking and accelerating less, and using less fuel. That's what Sentience Eco-Driving is all about. "We've provided software that resides in the vehicle that communicates with the environment to find out road conditions, so we can optimize the throttle and brake functions of the vehicle," says Domin.

The Ricardo website breaks down the findings of the company's research on the system, noting fuel savings of between 5% and 30%, thanks in large part to Enhanced Acceleration/Deceleration (EAD). The system uses a combination of wireless and GPS technology. Additional software and processing can be easily incorporated into existing on-board electronics.

According to the 2010 Urban Mobility Report of the Texas Transportation Institute at Texas A&M University, Americans wasted 3.9 billion gallons of fuel and 4.8 billion hours of time due to traffic congestion in 2009. But thanks to SARTRE Vehicle Platooning, an innovative new system developed by Ricardo, instead of being faced with legions of taillights, speeding, slowing and steering, commuters may soon be able to follow in a line behind a lead vehicle which automatically controls all of those tasks. The commuter can read the paper, catch up on work, or eat breakfast while traveling in his or her own car. The line maintains a consistent speed and cuts down on wind resistance, which results in fuel savings of up to 20%. Domin describes the system as a high-speed convoy led by a trained driver in a lead vehicle. Individual drivers simply push a button to enable their vehicles to go into a robotic mode and enter the convoy. "It's all coordinated using wireless communication between vehicles," Domin says. He says that the system is currently in the testing and validation stage in Europe. "This is technology that I'd like to bring to the U.S. Any type of increased fuel efficiency goes right into car owners' pockets. So that's something we can look toward in the future," he adds.

Taxiing to and from the airport terminal gate and runway is a major source of CO2 emissions. Aircraft are currently required to use their main propulsion jet engines in a highly inefficient manner for slow speed ground movements; the consequence is greater local air and noise pollution, as well as wasted fuel and hence increased carbon emissions. Ricardo has successfully engineered and delivered a demonstrator robotic, pilot controlled towing vehicle known as 'TaxiBot' for Israel Aerospace Industries (IAI). The TaxiBot concept is capable of operating with both wide and narrow bodied commercial airliners; it requires no modification to the aircraft, taxiways or runways, and only minor changes to airport infrastructure

An important aspect of Ricardo's work is optimizing systems to reduce costs and increase efficiency using the company's Integrated Cost Reduction (ICR) process. ICR addresses systems holistically and involves making choices based on the impact of the entire system, rather than simply optimizing a single component at a time. Domin says, "Doing so requires a strong understanding of the supply base, as well as technical performance characteristics. ICR has been instrumental to helping clients improve performance, quality, and service while benefiting from substantial cost savings. The process combines the thinking and efforts of all stakeholders, including Ricardo clients, their customers and suppliers, to arrive at savings by eliminating over-designed or excessively complex components and systems, cost of supplied parts, and "joint" processes and services.

The company has been working with Ford Motor Company on reducing the cost of the materials that go into their vehicles. In March, Ricardo received the Gold World Excellence award for supporting the development and implementation of Ford Service parts value management processes. Chris Domin says, "ICR enables automakers more easily manufacture and deliver better vehicles at substantial cost savings."

At its heart, Ricardo is a company of problem-solvers, says Domin. "We aren't the largest operation, but we have engineers with wide and varied backgrounds, so it makes us prime candidates for delivering solutions." That's only one aspect of Ricardo. "We have an innate ability to help not just with the technology side but the business side as well. We can place an engineering solution within a customer's strategic business plans and make a big difference."

Many factors contribute to the company's success, and one of them is copper. Domin credits copper for its conductivity as well as its adaptability to the new technologies Ricardo develops. "It's central to everything we're doing," he says. "Our power sources and computing technology rely on the properties of copper to enable all these systems to work together." The Copper Development Association continues to support the efforts of Ricardo and all companies who rely on copper.