Vehicle electrification has gotten a lot of attention in the last few years, particularly for major OEMs. But one of the little-known areas of growth in this area is in the ability of relatively small companies to do big things. Two such companies are ALT-e and Enginer. While focusing on very different areas of aftermarket conversion, both companies offer innovative solutions for lowering gasoline consumption and emissions without purchasing a new vehicle.

Enginer, Inc. is a developer of after-market plug-in hybrid conversion kits designed for individual hybrid owners. The company, with about 15 employees, is based in Troy, Michigan as well as Shanghai. President and Chief Engineer Jack Chen says that the company's Plug-in Hybrid Electric Vehicle upgrade system (PHEV kit) can bridge the gap between hybrids and full-electric vehicles. In other words, hybrid owners can further reduce their fuel consumption with the added electric capabilities of the PHEV system.

Auburn Hills, Michigan-based ALT-e, with 45 employees, produces range extended electric powertrains, with a current focus on fleet vehicle markets. Jeff DeFrank, CTO and one of the founders of the company, says that owners of fleets, including taxis, limos, delivery trucks, vans and shuttle buses, can opt to install ALT-e powertrains instead of replacing entire vehicles. The powertrains deliver equal or better performance at a fraction of the operating cost of comparable gasoline-powered vehicles, according to DeFrank. 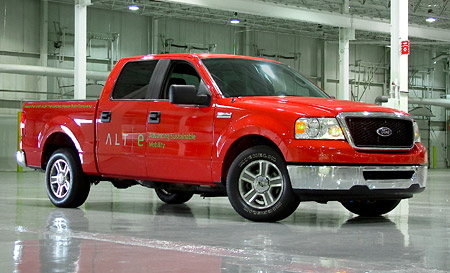 Increasing sales of hybrid and electric vehicles signals an overall increase in interest in the kind of energy saving features that these products provide. DeFrank notes that there are about 100 million fleet vehicles on the road today. "Existing fleet vehicles have 50 to 100 thousand miles on them," he says. "Owners would eventually have to replace the engine and transmission anyway. So now they can opt put in new technology that offers a return on investment in maintenance costs as well as energy savings." He adds that many fleet owners would save even more money in carbon credits. "Government fleets, too, are supposed to buy greener vehicles over traditional gas-powered vehicles. These are all areas where ALT-e powertrains can make a difference," he says.

The cost for the ALT-e kit installed is around $30,000. DeFrank points out that the ALT-e powertrains are still in the development phase, but will ship to nationwide installers later this year. "The powertrains will give new life to existing vehicles, saving owners from having to purchase new ones," he says. 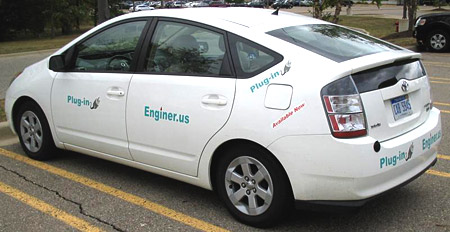 A Toyota Prius equipped with the Enginer PHEV System.

The market for Enginer's PHEV kit is the current hybrid car consumer, someone predisposed to alternative energy vehicle solutions. The company has received a great deal of interest from the European market because gas prices there average $7.00 per gallon. As U.S. gas prices rise, it's likely that interest here could rise as well. "Currently, Prius has 90% of the market share," says Chen. "But the kit can be installed on any make of hybrid vehicle." He says that Enginer's PHEV kit can further increase the fuel economy of the average hybrid car by 40% to 100%. "The battery can be charged from a regular household outlet," he says. "Then it acts as supplemental power, enabling the driver to go much further without using gasoline. And if the owner purchases another hybrid in the future, the kit is transferable." The kits range from $2,000 to $8,000 and are easily installed, but most consumers will have installation completed by a dealer. Chen says that Enginer is on target to provide a total of 50,000 units to markets across the world by 2012.

Both companies use copper extensively in their after-market innovations. ALT-e's Jeff DeFrank says, "Everything is electronically controlled, so that means copper plays an essential role in our product development." Our electric motors have copper windings in the stators. One of our partnerships is with a company that provides an induction motor that uses copper in the stator and the rotor. We've also added wiring, including about 1,000 circuits and a hundred feet of high-voltage cable per vehicle, and that cable is made of heavy copper wires. 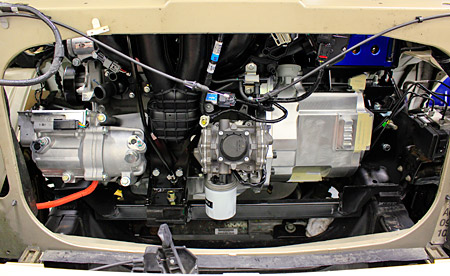 Enginer's Jack Chen says, "Copper is a very important component in the PHEV kit. We use copper wiring for all our high current cables and inter-cell connections because it is flexible, with low resistance, and widely available."

Chen and DeFrank agree that the time has come for a radical shift in how we treat the environment and that underlying principles of their businesses include a desire to be part of the solution in addressing environmental issues. Jeff DeFrank says, "It's clear that we just really need to clean up the air. With all the fleet vehicles on the road today, ALT-e can have a great impact on the environment by addressing this market. We think this is a really good development, especially in cities. And it makes financial sense, so we said 'Let's do it.'" Chen adds, "There is also a limited amount of oil. It took millions of years to form, and we're using it all in about a hundred years. Electricity is much cheaper than gasoline and much greener."

Both ALT-e and Enginer have long-term plans for their companies. Jack Chen says his company considers the PHEV kit to be an attractive option for potential sales through auto dealerships in the future. Jeff DeFrank predicts that the market for conversions such as his company's powertrain solution will last for at least ten years. By then, the company will be more focused on OEMs and becoming a direct supplier of powertrains.

Both companies have broadened the reach of electrification into after-market opportunities. They're strong examples of what can be accomplished with market knowledge, a great deal of engineering know-how, and a desire to help improve the environment for future generations.