Copper Is on Board as 2011 Detroit Auto Show Electrifies Visitors

As anyone who attended the North American International Auto Show in Detroit this year can attest, the most exciting aspects of new automotive technology are no longer in the cool-but-not-coming-anytime-soon category. A lot of what automakers have been dreaming about has arrived. And not just in flashy concept cars OEMs have traditionally displayed to demonstrate to show-goers what is possible. The overall atmosphere of this year's show was authentically, well, electric. Just about every automaker and supplier showed off their latest technology. Auto fans responded enthusiastically, peering closely at motors encased in Lucite, watching the impressive action on huge video walls and getting behind the wheels of electric vehicles. Show attendees got the chance to ride in all-electric cars at the Michigan Economic Development Corporation display on the venue's lower level and at the Ford Motor Company exhibit, where they stood in line for as long as an hour to sit in a Focus EV or a Transit Connect that made laps around a raised track. Other full-electric vehicles on-hand at the show included the Honda Fit EV, a Toyota Prius plug-in, the Mercedes SLS AMG E-Cell, the Tesla Model S, the BYD e6 all-electric crossover, the Venturi America and Li-Ion Motors' Inizio. 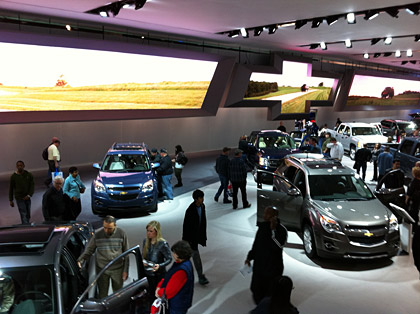 Copper at the Heart of it All

Virtually all of the automakers and suppliers at the Detroit show have electric or hybrid vehicles either already on the road or on the calendar for launch in 2011 or 2012. Hybrids currently for sale or headed to showrooms this year include the Chevrolet Volt, Nissan Leaf, Fisker Karma, Wheego LiFe, Smart Electric Drive, Coda Sedan, and the Think City. That's a lot of new technology - and a lot of copper. A 2010 Reuters article noted that half the world's annual output of copper goes into electrical and mechanical applications, so it follows that as automotive OEM's and suppliers plan electric versions of their products, copper's role will increase. It's a fact that Bob Weed, vice president of original equipment manufacturing for the Copper Development Association (CDA), has studied since the early days of vehicle electrification. According to Weed, the average car produced in North America contains 50-55 pounds of copper. "In an electric car, that amount is closer to 150-180 pounds," he added. "More than two-thirds of the copper will be found in car's wiring harness and electrical components, which will naturally increase as vehicles rely more on electric power." 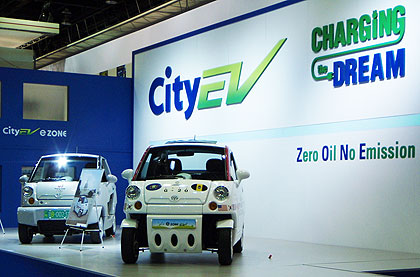 Chevrolet and Ford on Electrification

Perhaps the biggest star of the auto show was the Chevrolet Volt, named "2011 North American Car of the Year" by a jury of North American auto journalists. Already in production, the Volt had also been named 2011 Green Car of the Year by Green Car Journal and Car of the Year by Motor Trend Magazine. Making his first Auto Show appearance as CEO of General Motors, Dan Akerson spoke about how the Volt differs from the all-electric vehicles GM will likely introduce in the near future. "We are also producing battery electric vehicles but we think that that's a different application." He explained that all-electric cars will be aimed at drivers in large cities who will be able to do most of their commuting without needing to frequently charge their batteries. According to Akerson, an all-electric application is "more of metro and urban car where the extended range electric vehicle, the Volt-type technology, provides much more latitude and flexibility in its use." Akerson is said to be planning to increase production of the Volt, another indication that the buying public is ready to go electric in greater numbers than originally anticipated. 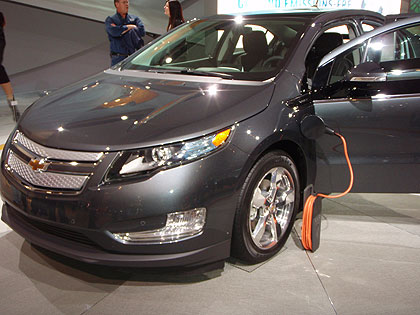 The Ford Motor Company exhibit was the largest and possibly the most impressive, with the aforementioned riding opportunity and the 2012 Focus Electric , the company's first dedicated electric vehicle, scheduled to go on sale later this year. The automaker has also announced that the C-Max Hybrid and C-MAX Energi, a plug-in hybrid, will be launched in North America in 2012. The Detroit Free Press noted that, "Aside from the hybrid Fusion and Escape as well as the Lincoln MKZ, Ford also sells one electric vehicle, although primarily to fleet customers. The Transit Connect Electric van has been on the market since last year and has helped Ford learn about issues and opportunities for electric cars." In a recent interview, Ford President and CEO Alan Mulally told the newspaper, "We are going to have, clearly, the most comprehensive electrification strategy available." 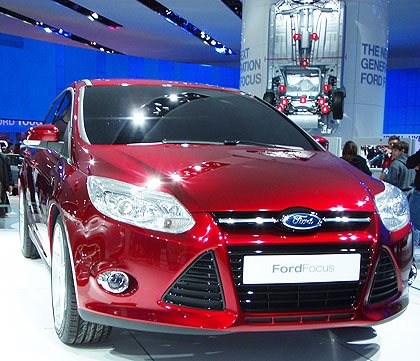 Many more automotive heads discussed their companies' approaches to electrification at the Automotive News World Congress, held in Detroit to coincide with the auto show opening. Toyota Motor Sales U.S.A. president Jim Lentz announced that electric versions of the Scion IQ and RAV4 could be expected by the end of 2012. The company's North American president Yoshi Inaba said Toyota will sell a million hybrids per year this decade, will offer a plug-in hybrid in two years and sell a full-electric car by 2012. BMW AG's board member for marketing Ian Robertson predicted that electric vehicles will only represent five to seven percent of the market worldwide, unless the Chinese emphasis on battery technology changes the paradigm. He added that BMW is also exploring alternative forms of green energy. Henrik Fisker, Fisker Automotive CEO, anticipates a healthy market for premium plug-in hybrids. His company plans to build 100,000 to 150,000 vehicles in the U.S. and export the majority of them overseas. Meanwhile, Rodney O'Neal, CEO of automotive supplier Delphi, urged OEM's to allow electronics experts, like his company, to continue to play a key role.

While most automakers have plans for electrics in one form or another, their acceptance by the public may be problematic due to the lack of a substantial charging infrastructure, according to a recent New York Times article. At the Automotive News World Congress in Detroit, however, Nissan America Chairman Carlos Tavares took issue with this position. "How many 110-volt wall outlets exist in America today? Maybe 100 million? Our houses probably have several dozen each." He added that 80 percent of charging will happen at home overnight, using either 110-volt or 240-volt chargers. According to the Nissan website, the Leaf "takes about 30 minutes to 80% at a 480-volt quick-charge station. Starting from a depleted battery, 7 hours at 220/240V (depending on amperage), about 20 hours at 110/120V." Meanwhile, Chevrolet says the Volt can take up to 10 hours to charge using a 120-volt home outlet, and about four hours with a 240-volt outlet. While charging can indeed take place in consumer garages, as Tavares noted, there will also be a need for charging stations that can accommodate drivers' need to charge their vehicles on the road. A recent USA Today article discussed the growing number of charging stations being installed by major retailers. This is another area of growth for copper.

Jerry Klarr, Director of Hybrid Programs at engineering services provider AVL, recently told the CDA that in addition to copper use in batteries and high voltage wiring systems, "There are going to be charging stations built that are almost certainly going to use significant amounts of copper." The CDA's Bob Weed added, "We're excited about the possibilities for copper's stakeholders as charging infrastructure developments continue to grow." 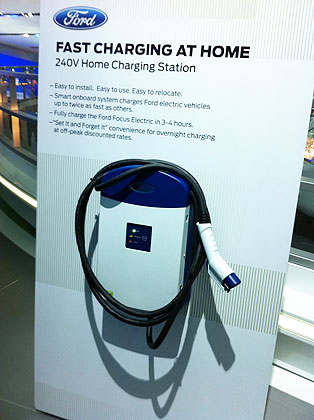 Charging stations like this one will likely appear in consumer garages soon.

In a review of the auto show, Automotive News Executive Editor Edward Lapham noted that the talk from auto executives at the World Congress "suggests that automakers really are serious about electric vehicles, and it's a positive sign when people in the industry are feeling frisky again." It's a positive sign for copper, too. Bob Weed predicted that by 2015, 10% of all vehicles sold in the U.S. could have some form of electric propulsion. He added, "I welcome stakeholders at companies involved in vehicle electrification to take advantage of the wealth of resources available at the CDA as they move toward electrification and ultimately, a greener, more efficient automotive future."