Automakers Face Challenges on the Road to Electrification

By Bob Weed, with Rose Morand

GM announced a sales price of $41,000 for the new Chevrolet Volt when it goes on sale at the end of 2010, which is about $8,000 higher than rival Nissan Leaf. The announcement comes at a time when automakers are struggling with numerous issues, including affordability, in the push to deliver electric vehicles that consumers will embrace.

The Detroit Free Press reports that Daniel Sperling, director of the Institute of Transportation Studies at the University of California, Davis, addressed the issue of affordability this week at "Building the U.S. Battery Industry," a conference sponsored by the National Academies of Science, Engineering and Medicine. According to the article, Sperling says that "…people who will buy the vehicles are motivated by social values such as reducing gas consumption, not supporting foreign countries that supply most of our oil and might be associated with terrorists, or having a modest effect in containing climate change."

Meanwhile, auto manufacturers each have their own take on what, how and when consumers will become widely accepting of EVs. On June 16th automotive leaders, suppliers, government representatives, auto analysts and media representatives gathered at the Rock Financial Showplace to share the latest information about the drive for cleaner, more efficient vehicles at the Automotive News Green Car Conference and Exhibition. The day-long conference featured discussions of the challenges of going green, the barriers to meeting regulatory standards, ways to quicken progress, and how to gauge what consumers will adopt and when. As vice president of original equipment manufacturing for the Copper Development Association (CDA), I attended the event. Below are some highlights from key representatives at the conference.

The keynote speaker was Nancy Gioia, Director of Global Electrification at Ford Motor Company. She predicted that the number of vehicles on the road will double by the year 2020, from 1 billion to 2 billion, and asserted that fuel consumption and emissions can't double and be sustainable. In her opinion, the only sustainable option is to increase the number of vehicles using electrical power and alternative fuels. 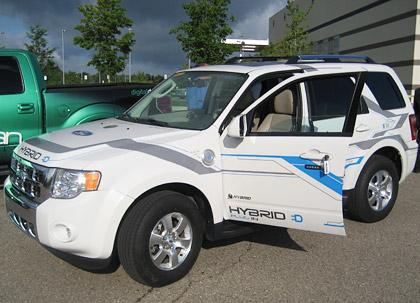 Gioia presented Ford's plan of electrifying five new vehicles. The company has already electrified the Fusion, Focus and Escape, as well as the new Transit Connect commercial van. Over the next few years, she said, 10 to 25% of Ford's global production will be electrified.

I predict that by approximately 2015, 70% of the electrical vehicles Goia mentioned will be hybrids, 20-25% will be plug-in hybrids, and the remaining 5-10% will be pure battery electric vehicles or BEVs. 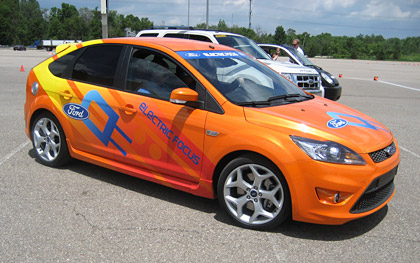 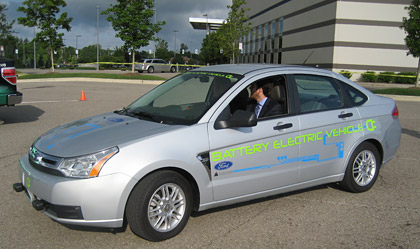 Ford brought three vehicles to the event that participants could test drive. All three handled well on the test course and in the parking lot, and felt very similar to their current production models. The changes in power train architecture are obvious when you look under the hood or in the trunk. 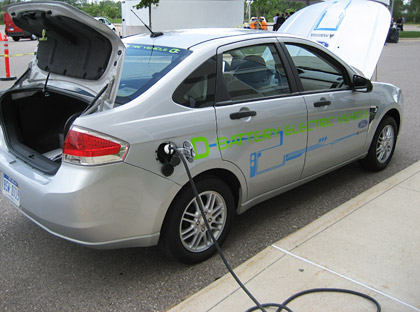 The Fusion during charging.

Richard Steinberg, Manager of BMW Electric Vehicle Operations and Strategy for North America, had a Mini E Cooper on hand at the conference. The vehicle currently has a power train from AC Propulsion in San Dimas, California, but future vehicles are expected to have all in-house power trains, an economical choice for the auto maker. The range of the vehicle is about 100 miles on a single charge, and driving is fun - a major element for the future success of the line. 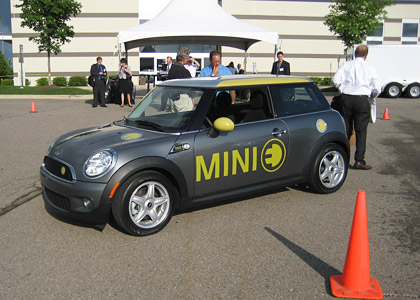 The Mini E Cooper also features a unique regenerative braking system, which feeds energy back into the car's batteries. When the driver's foot is taken off the accelerator, there is no need to step on the brake pedal because the regenerative braking is immediately engaged and slows the vehicle. The average driver will notice an immediate difference in this style of driving. It was a fun car to drive, but it did take some time to get used to it. The regenerative braking provides a significant benefit to electric vehicles in an urban environment. The greater need for braking in city driving will result in extended mileage for city driving as opposed to highway, because the battery is being charged every time the vehicle slows or stops.

It's BMW's position that, at least in the near future, all-electric vehicles will likely function as a family's second car due to the restrictions of having to maintain a charge.

In his remarks, Micky Bly, Executive Director, Group Global Functional Leader, Electrical Systems at GM, disagreed with BMW's position. He maintained that mass-market electric vehicles cannot only be a family's second car. In order for an EV to be successful, he believes it has to be capable of being the primary vehicle a family owns. There are no short-term issues around charging infrastructure, he says, because people can do it at home or have an extended range vehicle. But this could change in 15 or 20 years if there's a huge market acceptance of plug-ins, he added.

That "if" was one of many debated by conference representatives. Bly said that in order to make all-electric or hybrid vehicles that are acceptable to consumers, auto makers need to optimize batteries, motors and power electronics. Two other issues include the braking system and thermal management. An electric vehicle requires good temperature control of the batteries, the power electronics and also the passengers. According to Bly, "Passenger comfort takes as much energy as propulsion in an electric vehicle."

He added that among the biggest challenges to electrifying vehicles is reducing costs, and noted that GM is engaged in the full range from mild hybrids to battery-only vehicles to fuel cells. Volt is an extended-range EV with a small gas engine on board that can recharge the battery, giving the car a driving range of 300-400 miles.

The challenge, from GM's perspective, is achieving the balancing act of performance, durability, packaging and design vs. charge time, safety, customer satisfaction and regulations compliance.

Speaking of whether drivers will embrace new technology, THINK CEO Richard Canny was on-hand to discuss their company's THINK City, a 100% electric car currently produced in Finland and scheduled to begin manufacture in Elkhart, Indiana in early 2011. He noted that getting the public to embrace new technology is key, saying, "It's easier to build an electric car than it is to build a profitable EV company." 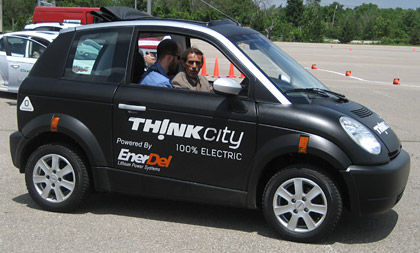 Paolo Ferrero, Senior Vice President of Chrysler Power Train, presented Chrysler's EV goal of achieving best-in-class fuel economy, pointing to a hybrid-electric Ram Pickup truck, and the company's plans to bring the Fiat 500 to North American buyers. In the process of moving consumer vehicles to electrification, Ferrero says, a short-term solution to gasoline use is compressed natural gas. He said that CNG is available at a lower cost and produces 25% fewer CO2 emissions than traditional gasoline.

Copper and the Future of Green Vehicles

There seem to be as many opinions on the electric evolution currently underway in the automotive industry as there are experts. What seems clear is that, ultimately, the move toward vehicle electrification is going to have a positive impact on the copper industry. According to market studies conducted by CDA, electric vehicles will contain two to three times the amount of copper as a conventional vehicle. Wiring harnesses, power electronics, motors, batteries and the infrastructure for charging vehicles will all require additional copper to maintain or increase their efficiency.