NEW YORK, NY— Energy 2030 On the Road, a national campaign from the Alliance to Save Energy, to engage state and local stakeholders in policy discussions centered on what actions are needed to reach the goal of doubling U.S. energy productivity by the year 2030 was held in New York City on September 29. The event featured Governor Pataki and Congressman Tonko as keynote speakers, along with panelists ranging from officials, businesses, universities and other stakeholders across the energy industry. 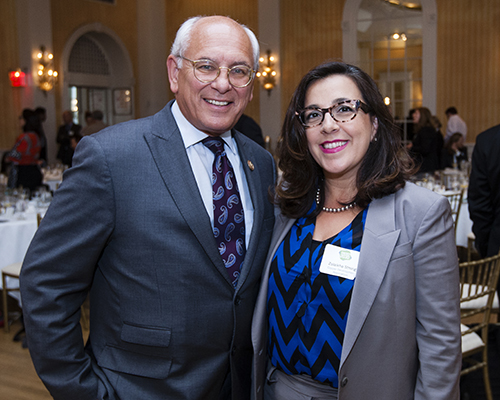 Congressman Tonko and Zolaikha Strong at Energy 2030 On the Road

Zolaikha Strong, director of sustainable energy for the Copper Development Association (CDA), joined a panel discussing the essential role that copper plays in renewable energy and its infrastructure. “Copper is a reliable, sustainable and extremely effective material for many energy storage technologies. The copper industry has a stake in the success of this technology, because the role of copper in energy storage applications is expected to grow significantly by 2030.”

With heightened awareness on the effects of energy use, the Energy 2030 event focused greater attention on the importance of energy productivity. "Considering 2% of New York City's buildings account for 50% of citywide energy use, local policymakers' efforts to increase the efficiency of the built environment has a significant impact. Their work is reducing emissions in the Big Apple and bringing us closer to the goal of doubling our nation's energy productivity. We're fortunate to have the opportunity to engage with stakeholders in this forward-thinking, influential city," said Kateri Callahan, president of Alliance to Save Energy.

Keynote speaker George Pataki, now with Chadbourne and Parke and Chairman of the Pataki-Cahill Group, helped promote efficiency while serving as Governor of New York. "Having worked in both the government and the private sector, I appreciate how the Energy 2030 On the Road campaign brings together stakeholders from these groups in order to achieve this important goal. It’s the all-inclusive, all-hands-on-deck approach that sets this campaign apart," said Governor George Pataki.

Other speakers at the event included Congressman Paul Tonko (D-NY), President of NYPA Gil C. Quinones, President of New York Green Bank Alfred Griffin and many others. Panelists and speakers discussed actionable strategies for investing in efficiency, modernizing infrastructure and educating lawmakers and consumers on the importance of energy productivity.