NEW YORK, NY-As we get ready to celebrate July 4, take a moment to wish happy birthday to the Statue of Liberty, who celebrates her 125th birthday this year.

She's been a proud symbol of our nation's freedom and has stood the test of time - with the help of the 31 tons (62,000 pounds) of copper, the mighty metal that continues to be a sustainable, recyclable material widely used today, according to the Copper Development Association.

In October, the Statue of Liberty will close for nine to eleven months to install a secondary stairwell down from the pedestal as a safety measure. It hasn't been the first time the historic sculpture has been upgraded or restored in its 125 year history. But copper has been there since the beginning - "Virtually intact… despite the deterioration of other metals," National Park Service architect Peter Dessauer said in 1984, during its 100-year anniversary restoration.

A Monument Sustainable over Time-Thanks to Copper 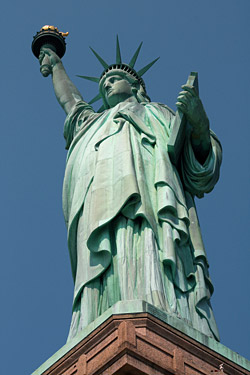 The Statue of Liberty in her full copper patina.

Sculptor Frederic-Auguste Bartholdi designed the Statue of Liberty as a gesture of friendship between France and the U.S. He completed the statue in 1884 and it was dedicated in October 1886.

Copper has helped maintain the strength and beauty of the Statue of Liberty over a century of sea wind and rain, which have naturally oxidized to give her a green patina. In 1906, Congress appropriated $62,000 to paint her, but protests resulted in the abandonment of the idea. "Sacrilege," said a newspaper report at the time.

On the 50th anniversary of the Statue of Liberty, maintenance workers constructed a 250-foot copper apron over the pedestal to prevent water seepage.

A manager said at the time, "In the future, Miss Liberty's feet will be kept dry with this protective coating."

As her 100th anniversary approached, the Statue of Liberty required additional work, including the repair of Lady Liberty's torch, arm and shoulder. Workers erected a scaffold around the entire 12-story edifice as more than 500 skilled laborers scrubbed the copper clean without removing the patina. The interior received additional structural repairs. The Statue of Liberty closed again in 2001 after the Sept. 11 terror attacks and reopened in 2004 after a $20 million upgrade.

Copper Use in the Statue of Liberty