The Mettle of Metal: Copper Keeps the Statue of Liberty Standing Tall for 123 Years

NEW YORK, NY— Here's a trivia question for the 4th of July.

Why is the Statue of Liberty green?

Give credit to the 31 tons of copper that make up the Statue of Liberty. Over the last 123 years, the copper has naturally oxidized, creating the patina which protects Lady Liberty from wind and wear. As with this great monument, the mighty copper metal has withstood the test of time - and continues to be a sustainable, recyclable material widely used today.

Copper Use in Lady Liberty 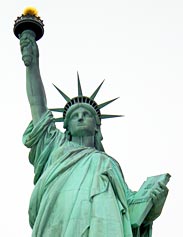 Lady Liberty stands as a symbol of American strength thanks to copper, the material that's withstood the test of time. The Statue of Liberty is made of 62,000 pounds of copper (31 tons).

Copper remains an important and viable material. It's 100% recyclable, sustainable and eco-friendly. Here are some modern uses of copper:

Urban Mines - a Hidden Source of Copper: It's estimated that 80% of mined copper has been recycled and is still in use today. Think of the many products you use daily - your cell phone, computer, DVD player or flat screen TV. None of these products would function without copper, the best electrical conductor of the non-precious metals. A cell phone contains about 16 grams of copper. More than a billion cell phones are sold worldwide annually, the equivalent of 16,000 tons of copper. Recycling companies now see a real value in recycling copper as consumers discard their old products in favor of the newest technology.

A Cool Alternative to a Hot Day: Tired of the red eyes and green hair you get from swimming in a chlorinated pool? Try a chemical-free treatment that uses copper. The ionization pool system uses copper ionization and liquid oxidation to sanitize pool water. Ions added to the water kill bacteria and algae without exposing you or your family to chemicals in the water.

Shine the Light on Recycled Copper: If you're in the market for eco-friendly lighting, bulbs and electricity are only part of the solution. Copper light fixtures, both indoor and outdoor, are incredibly durable and 100% recyclable.

Create Kitchen Efficiency with Copper: Looking for an eco-friendly kitchen? Start with copper pots and pans. Copper has nearly twice the thermal conductivity of aluminum or cast iron and is 25 times as conductive as stainless steel. The bottom line? Copper heats up faster, requiring less gas and electricity.

Copper's superior thermal and electrical conductivity, combined with its 100% recyclability makes it a truly green material perfect for building a sustainable world.

On-Demand Water Heaters: What if you left your car running all day because you planned to go to the store later. Wasteful, right? That's what happens with most water heaters. Today, tankless, or on-demand water heaters now are available to supply hot water without having to maintain a reservoir of water at high temperatures 24-hours a day. Because of its high thermal conductivity, copper is the best material to use in these units. According to the Department of Energy, energy savings can be as high as 34% for households using tankless water heaters.

Copper & Solar Power: Using the power of the sun is another way to reduce the cost of heating water. Copper is key in the construction of solar collectors, made up of a copper absorber plate and copper tubing to route the water through the system. Energy savings for a family of four can be 38% a month.

Capture the Power of Wind: As the Obama administration searches for alternative energy sources, attention has been drawn to wind energy as a sustainable source of power. Giant turbine wind farms and individual micropower generation units are becoming more common Copper is important to the operation, efficiency and protection of the system. Copper also plays a critical role in the turbine motors and their control wires.

Copper and Electricity: Electricity flowing through copper wires meets far less resistance than it would in aluminum or steel wires of the same width. In fact, copper is the most efficient and economical electrical conductor available. 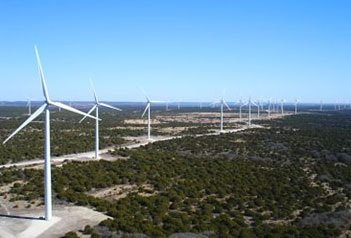 Copper grounds the towers in the event of lightning, transports electricity to substations and connects the system into the utility grid.

The Final Word: We're in No Danger of Running Out of Copper