NEW YORK, NY— Higher-efficiency electrical motors could one day reduce our dependence on foreign oil, lower greenhouse gas emissions and help manufacturers stay economically viable by reducing energy costs, according to the Copper Development Association (CDA), which is leading the charge to improve electrical motor efficiency in the USA and abroad. 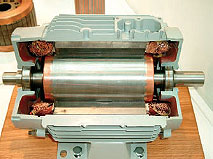 A new generation of electric motors using copper rotors will lower energy bills for industry and consumers. The highly efficient rotors were developed by an industry consortium led by the Copper Development Association and funded in part by the U.S. Department of Energy and International Copper Association.

Click here for a high-resolution version of this photo.

Millions of electrical motors are sold in the United States each year. They power air-handling systems, pumps and major appliances, as well as the machinery used to manufacture these and other products," says Ken Geremia, communications manager for CDA. "However, those motors all use less-efficient aluminum rotors because they have always been relatively easy to make."

Copper, which is 60 percent more efficient than aluminum, is the preferred material for electrical conductivity, but until recently, there had never been a practical method for mass-producing copper rotors.

Working with various motor manufacturers, the CDA has developed a new die-casting process that produces copper conductor rotors (CCR) easily and efficiently and increases motor efficiency by up to 2.1 percentage points, according to Dr. John Cowie, CDA vice president and project manager of the copper rotor development program for CDA.

Even a modest increase in efficiency adds up to big savings. The U.S. Department of Energy (DOE) estimates that just a 1-percentage-point improvement in motor efficiency would save the nation $1.1 billion in energy costs annually. Air pollution would also significantly decrease as a direct result of reduced energy consumption.

Recognizing the benefits of CCR, the U.S. government appropriated $1 million in 2004 and another $1.2 million for 2005 to fund a public-private partnership called the Copper-Based Casting Technology (C-BCT) program. Made up of industry, government and academic representatives, the C-BCT is currently working to develop more efficient, durable and lightweight copper-rotor motors for the military's defense systems, says Cowie.

Copper has been essential to power generation since 1831, when British scientist Michael Faraday's experiments with copper wire, motion and magnetic force led to the development of the first modern electric motor, generator and transformer.

Funded in part by a DOE grant in 1997, CDA and its industry partners began researching new die-casting methods as well as molds that could withstand the high temperatures needed to cast molten copper and durable enough to last through thousands of casting cycles.

Motor manufacturers worldwide are closely examining the technology, and several European companies are already producing copper-rotor motors commercially, says Geremia. Interest from manufacturers in the USA, Japan, China and India indicates the new CCR process is likely to be adopted by others in 2005.