WASHINGTON, D.C. - A new study conducted in the U.K. holds promise for stemming Listeria contamination using copper alloys for food processing surfaces. Doctors C. William Keevil and Sandra A. Wilks of the University of Southampton, U.K., reported the study here today at a meeting of the American Society for Microbiology.

Listeria monocytogenes contamination is usually associated with the processing of ready-to-eat meat and poultry products. When it comes to foodborne pathogens, it has the second highest fatality rate, 20%, and the highest hospitalization rate, 90%. On average, there are approximately 2,500 cases of foodborne listeriosis each year in the USA, which result in about 500 deaths, according to the U.S. Centers for Disease Control and Prevention.

The study shows that the survival time of the often-deadly bacteria at room temperature is reduced to 60-90 minutes on a copper-based surface, depending on the alloy. During the 4.5-hour time period of the tests, there was only a minimal reduction of the bacteria on stainless steel. L. monocytogenes has been shown to survive for several days in a desiccated state on stainless steel when exposed to the air at room temperatures.

Keevil said many food-processing establishments have suffered long-term contamination problems with Listeria. He said the study suggests that appropriately durable copper alloys should be taken into consideration for the production and use of work surface materials in food handling, health and domestic environments.

A total of 28 alloys were tested. Those with a copper content of 90% or more rendered the Listeria nonviable within an hour. Nickel-silver alloys of 65% copper or more accomplished the same thing within 90 minutes. The study used a combination of direct plate counts and viability staining procedures.

The Listeria study is funded by the International Copper Association and managed by the Copper Development Association Inc., New York. 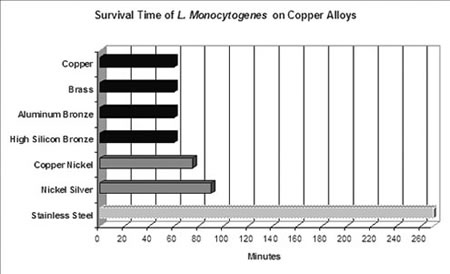 Dr. Harold Michels, CDA vice president of technical services, said the study is a first stage in determining the advantages of using a copper metal in the food processing industry. It has long been known that copper is inhospitable to such microbes as E. coli, legionellae and staphylococci, among others. He added that similar studies examining the survival of E. coli O157 have shown similar results, reducing viability of the pathogen from several weeks on stainless steel to only a matter of hours on copper alloys.