The town of Marfa in Far West Texas is an anomalous gem in a world that worships efficiency. Just getting to Marfa requires considerable effort and the difficulty doesn’t stop there. It’s a theme that repeats on so many levels and in so many ways that any contemplation of the art the town is famous for should at least mention it.

First, there’s the geography. Marfa is a three-hour drive from the nearest airport in El Paso—and getting to El Paso from major cities usually requires at least one plane change.

Secondly, there’s the physical shock to the system. The effect of the high desert on bodies accustomed to coastal, urban living, which most art visitors tend to be, is powerful. By the time people get to Marfa, they’re reeling from a combination of altitude, intense sunlight, and a landscape that’s literally very prickly. It all feels so utterly foreign that it could be another planet.

Add to that the sense of heightened anticipation, the suspense that’s been building, based on the narrative of pilgrimage, within which the journey to Marfa tends to fit. Visitors say things like, “I’ve been wanting to come here for years,” and “we’ve finally made the trip.” They’ve come to see things they’ve heard about, read about, perhaps seen pictures of, but never actually experienced.

All this is to point out that visitors tend to be in a sort of altered state when they get to Marfa. Which is pretty cool, since according to traditions from a range of different cultures and time periods, this is an ideal condition for encountering sacred or highly valued objects—like art. 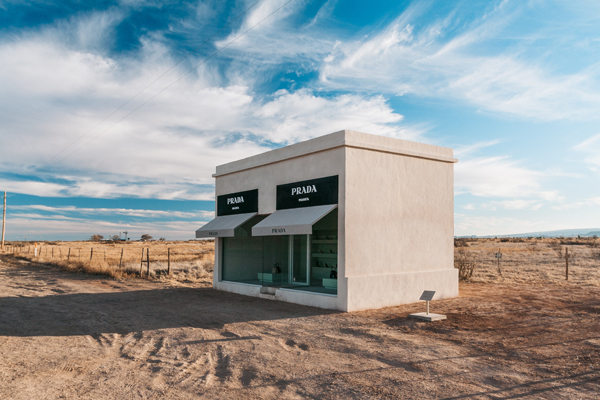 The iconic Prada Marfa, a permanently installed sculpture by artists Elmgreen and Dragset in Marfa, TX.
Photograph by Jonathan Percy.

Many Mesoamerican cultures used psychotropic substances in their rituals. And in order to see the most powerful of the paintings in the Lascaux caves, one had to crawl through a long tunnel on hands and knees. Although the journey to Marfa is not explicitly recognized as part of the art, considered in this context it’s not hard to imagine that the act of getting there makes the encounters people have with the work itself deeper.

Meanwhile, locals are used to the sight of these visitors—often people with indoor skin and black-rimmed glasses, from places like Amsterdam and Manhattan—standing on corners and trying to make sense of where they are. “Welcome to Marfa,” chuckles a local shopkeeper, looking out the window at a cluster of new arrivals.

It makes perfect sense that hometown historian Lonn Taylor titled his recent book about the area “Marfa for the Perplexed” —a welcome counterweight to accounts of Marfa that focus only on the art legacy of Donald Judd, an American artist associated with the Minimalist movement, while ignoring other aspects of the town’s history and culture. Yes, Marfa is an art hub, a mecca for encountering the Modernist visions of Judd and the other artists he admired. But, as Taylor’s entertaining and informative book demonstrates, important as Judd was for putting Marfa on the international art map, that is only one history among many.

Our focus here, however, like that of most of the visitors, is the work—specifically the pieces made of copper, of which Marfa has two extraordinary offerings.

Once you’re in Marfa, the theme of difficulty continues since it takes a bit of doing to get to the things. The town may be small, but it preserves a certain inscrutability, which is integral to its identity as well as its allure. You have to figure out where things are and who you need to ask in order to get access. Everyone is more than gracious when you present yourself as a seeker, but the routes can be circuitous.

In addition to making art, Donald Judd designed furniture. The impetus was his own need. When he arrivd in Marfa in 1977 with his young family, he despaired of finding ready-made pieces that were both functional and pleasing to live with.

“The few stores sold only fake antiques or tubular kitchen furniture with plastic surfaces printed with inane geometric patterns and flowers,” wrote Judd, who passed away in 1994.

The furniture to be found in Judd’s private living and working spaces—which visitors can see on tours conducted by the Judd Foundation— includes a Stickley bench, an antique Shaker rocker, pieces by Mies van der Rohe and several others. Much of it, though, is of his own design. 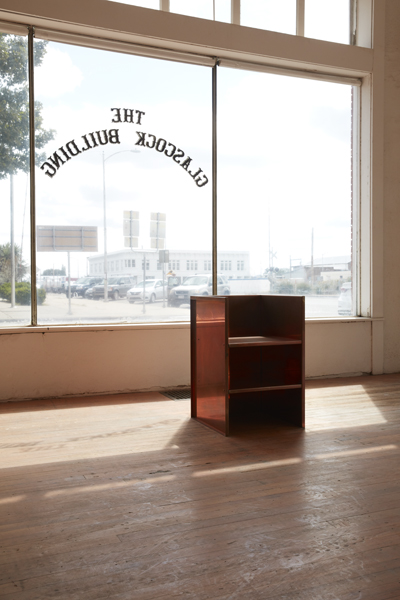 I knew through the Marfa grapevine that an armchair designed by Judd, made entirely of copper, could be found in a place called the Architecture Office. This Office is in the Glasscock building, one of the various Marfa buildings formerly owned by Judd and now administered by the Judd Foundation. The building is not part of guided visits by the Judd Foundation but is sometimes open to the public during community events.

Inside, the furniture is of Judd’s design and there are drawings and blueprints of his architecture projects on the wall. The building is usually locked but passersby can peer in and see the furniture. Not the copper chair though, because it’s out of sight from the door when the blinds are closed, which they nearly always are, presumably because of the sun.

When I met the staff members from the Judd Foundation outside the office at the appointed time, I was very excited to see the chair. I was not disappointed. It is not exaggerating to say that it is luminous. Glowing with a rosy pinkness, the small chair packs a dazzling punch. Coming in out of the sun, your eyes have to adjust, so at first the room seems dim—all except the glowing simplicity of the chair.

According to information provided by the Foundation, the design was first made in 1984 and this particular chair was fabricated in 1989 by Janssen CV in the Netherlands to Judd’s precise specifications. The chair is still in production, although now it is made in Switzerland by Lehni AG, a fabricator of furniture and art by Judd and others.

Donald Judd was a prolific writer who wrote extensively about his own philosophy and practice, including his approach to furniture design, which was a passion of his. Judd is adamant that furniture is not art, that first and foremost it must be functional. 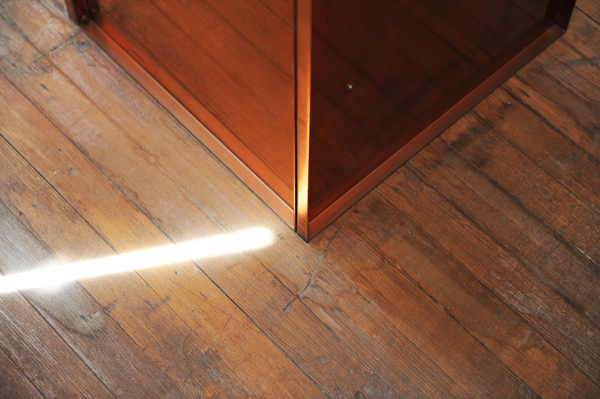 If a chair or a building is not functional, if it appears to be only art, it is ridiculous. A work of art exists as itself; a chair exists as a chair itself. The copper armchair is certainly a chair itself. Its lines are simple and seem to express the very essence of chairness—straight back, flat seat, sturdy-looking. The Lehni catalog says you can order it in 24 finishes, including 21 painted aluminum colors and 3 metals. Within the logic of the catalog, the copper chair appears as one option among many, perpetuating a fiction of interchangeability: “I need a chair, I like this chair, I guess I’ll get it in copper.”

But, the reality is more complicated. The chair in the Architecture Office is beautiful in a way that’s almost otherworldly. The copper makes it that way---the same chair in a different material would not stop a person in her tracks.

Copper was one of Judd’s frequently used materials in his fine art as well as his furniture.

According to the Foundation, Judd used copper in versions of almost all of the recurrent forms in his work: single stacks, progressions (round-front, square front, and with tubes), bullnoses, meter boxes, and large floor pieces.

Judd’s affinity for copper makes sense. It’s a pure element, and also a functional material used for industrial purposes. But there’s also a warmth and a sort of showy excess to copper that other industrial materials don’t have. Despite its plausible deniability as a utilitarian metal, it cannot help but draw attention to itself. And, because of the way it ages and patinas, it pushes the boundaries of control. Those qualities make it an interesting choice for an artist who was so famously controlling (as well as being a so-called Minimalist, although Judd himself disliked the label).

On the topic of commerce, Vilis Inde, a local gallery owner who also happens to own one of Judd’s copper chairs, pointed out that the chair’s value fluctuates not only according to the art market but also according to the copper market. We stood contemplating his chair, which, although of precisely the same design as the one in the Architecture Office seemed a whole different animal—both in how it was aging and also some other ineffable way. It seemed an individual in spite of its status as a manufactured thing. “A lot of copper right there,” Inde observed.

Roni Horn’s installation at the Chinati Foundation is without doubt the most spectacular use of copper in Marfa. It’s housed inside what was once a small dining hall on the grounds of the old army base that became Judd’s anti-museum, the main Marfa destination for art pilgrims. Judd conceived and built the Chinati as a place for permanent installations, where every piece would be site specific and inextricable from the landscape around it. The art there includes work by Judd as well as a select group of artists he invited, including Horn. 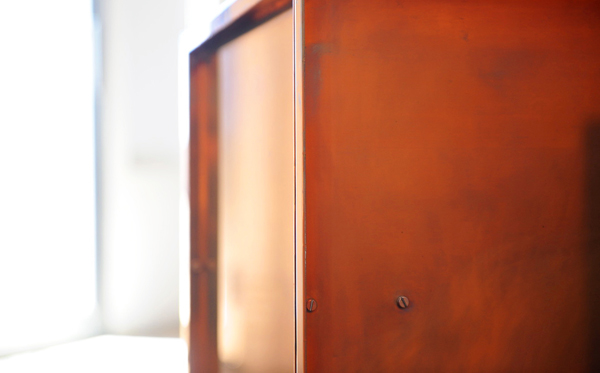 Visitors encounter the Horn piece near the end of the all-day guided tour. The tour is the only way to get to it. You can’t just pop in. So, in addition to the effort quotient that is part of virtually every Marfa undertaking, there is a particular chronology to what you experience leading up to it. A particular mind/body state has been cultivated, also a certain rhythm, achieved by walking, being in and out of the sun, and by being in the midst of what feel like resonant conversations between pieces of art—Judd’s iconic boxes, Dan Flavin’s lights—and the surrounding desert landscape.

The way the Chinati is arranged and administered stands as Judd’s purposeful rebuttal to the usual museum experience—the epitome of which would be the stampede of tourists in the Louvre straight to the sanctioned masterpiece that is the Mona Lisa. The pieces at the Chinati not only belong where they are, but seem actively to dwell there, in environments chosen just for them.

The two similar objects are monumental, solid copper cones, each weighing a ton, glowing on the floor of this somewhat decrepit old mess hall, the only building in the compound that’s been allowed to fall apart to some extent. Its “layers of peeling paint, cracked walls and exposed rafters“ (as the catalog puts it) make for a dramatic contrast with the highly polished, lovingly tended copper forms.

The tour guide at the Chinati told us that in the early days of the installation, in the late 80s, the windows of the building were left open and the piece was left uncovered, but it kept tarnishing at a dangerous rate. Now, more care is taken. Not only is it regularly polished, it’s carefully covered every night—a ritual that cannot help but call to (my) mind a prized racehorse in his stall with his special blanket.

Roni Horn chose not to grant permission to reproduce an image for this article. Of course, you can go to the Chinati website to get a sense of it, or better yet, make the sublimely inconvenient trip to Marfa and experience the full power of these and many other incredible works in person.