The location of Michelle DaRin’s home, located on seven acres of wooded land in Upstate New York, serves as inspiration for the handcrafted copper jewelry designs she creates in a studio within a vintage Airstream parked on her property. But to DaRin, her Airstream is as much a muse as it is a studio. 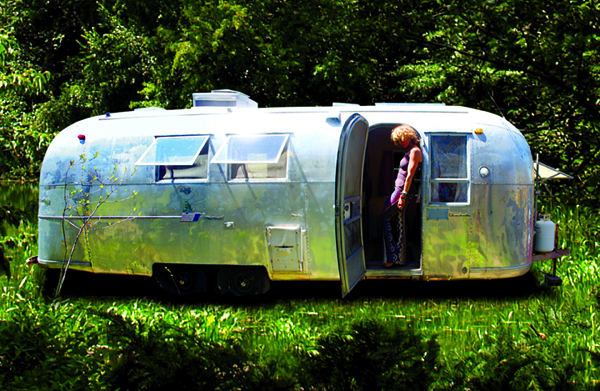 “It has become sort of a character in my business,” DaRin says, of the RV that’s featured in the latest photoshoot to showcase her line, where enameled copper bracelets are some of her standouts.

“There is a connectedness to nature and the earth and the spiritual piece of things,” she says. “That is a big thing for me.”

The seclusion she and her husband, children, two dogs and a cat share today, gives DaRin a sense of freedom that’s evident in how she expresses herself artistically.

“I love that I can sit out on my deck in my underwear and nobody is going to know,” she says.

It was in her youth when growing up on Staten Island, New York, that she realized the effect nature had on her. 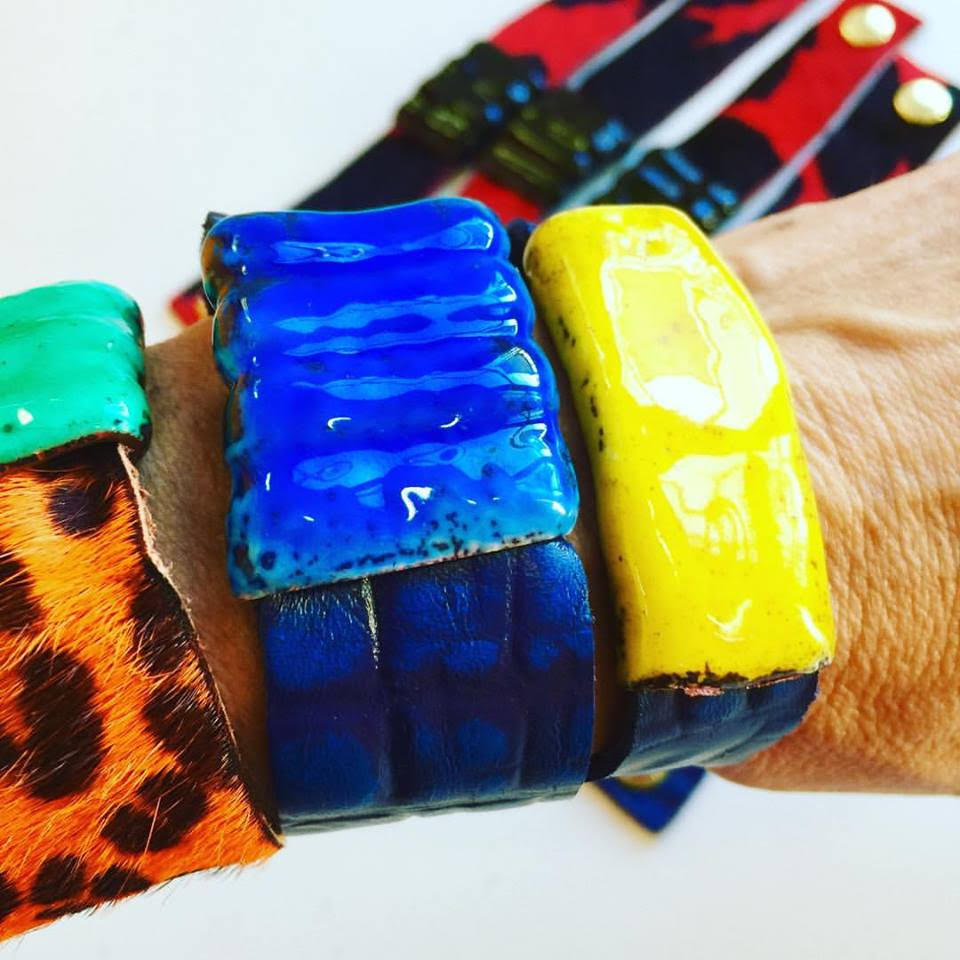 “Every summer we would go to the Poconos and I always felt I could decompress,” she says.

Now, as an adult, DaRin finds herself drawn to color, animals and symbolism, which have become central themes in her work that she describes as having a Native American influence.

“A lot of my bronze work involves symbolism,” she says.

Her spiritual side shines through in the form of guardian angels she might incorporate into one piece and animals serve a different purpose on another.

“I’m into the way animals have a message for us at different times,” DaRin says.

In addition to bronze, copper plays an important role in her designs.

“I love copper,” she says. “It’s from the earth, so there is this grounding thing about it.”

The true significance of copper for DaRin comes into play when she’s in the process of working with it.

“It’s a good conductor of energy and when I’m working, I usually try to have a mantra in my head, sending good thoughts into the pieces,” DaRin says. 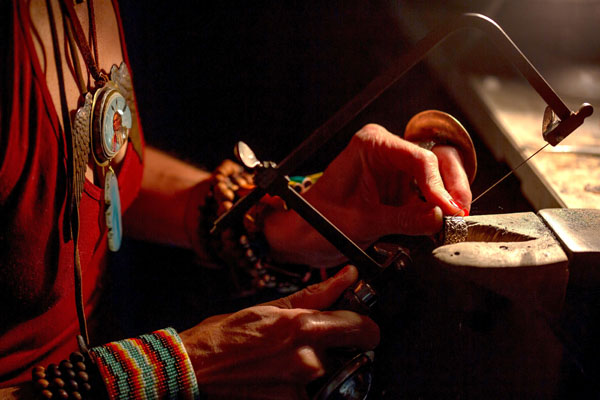 Her relationship with copper has deepened over time despite being forged out of necessity after getting her MFA from Syracuse University. When she graduated, she no longer had access to a full range of materials, so she had to figure out what equipment she was going to get and factor in the cost of materials, which led her to copper.

“Copper is cheaper than silver so there was a cost element to all of it,” DaRin says. “I love that whole, ‘necessity is the mother of invention’.”

She found that her work began to evolve after switching up the metals.

“When I started doing a lot of enameled copper, it changed my work,” she says. “The bracelets that are really selling now was born out of that.”

Regardless of the medium she’s using on any given day, you can typically find DaRin working in her studio that has every nook and cranny designated to a different part of her jewelry-making process. She also features a video on her website showing her making a project in her Airstream studio.

“It’s not a ton of space, but it totally works,” she says.

Decorated with red and white gingham curtains, the table alcove that came with the Airstream still stands and is where her kiln is located.

“It’s my one kiln where I do my burnouts for my bronze casting,” DaRin says.

The kitchen counter serves as her cutting station. 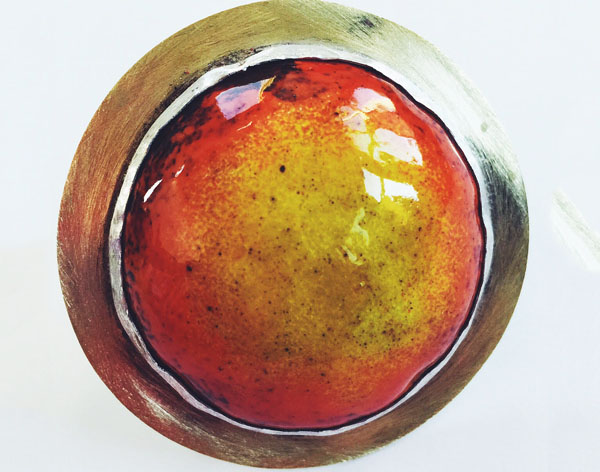 “I have a bench pin attached where I cut all my metal,” DaRin says.

The area where you would typically find the bed, that she removed when doing the studio conversion, is where DaRin does her soldering and enameling on one side of the room and has her drill press located on the other.

“Where my toilet would be is where I have my grinder,” she says.

DaRin also has an area designated for her anvil along with a collection of hammers.

It was during DaRin’s undergraduate years at SUNY Cortland, prior to discovering her passion for jewelry design, where she spent lots of time welding and casting while in the process of getting her BA in sculpture.

“We had a foundry, so we would do a lot of bronze and aluminum and we did some iron pours,” she says.

Her introduction to resin casting began at Syracuse University when she had a yearning to get back into the studio while working on two degrees: an MS in Art Education and an MFA in metalsmithing. As a graduate student, she valued the opportunity the studio gave her to experiment with different metals.

“You would have brass and nickel silver and regular silver and copper sheets and wire,” she says. “You learn the properties of the different metals.”

Community bronze pours were a regular happening and she had access to kilns for enameling and casting, even teaching gravity casting, centrifugal casting and metalsmithing at one point.

While DaRin says she never took to painting, she began having fun with color through the enameling process.

“I have always loved paintings that were really colorful and it just really took,” she says.

It was during her time at Syracuse when she took up the opportunity to work for a friend who was in the jewelry business.

“I started doing some soldering and I said, ‘I really like this’,” she says. “I love welding — it makes me feel powerful.” DaRin says she has always been drawn to metal and fashion, so she found that making jewelry served as a satisfying marriage of the two. “I really enjoyed the medium of working with metal and being able to make things I could wear,” she says. “It was all of that coming together. It was fun and I got hooked.”

She began showing her work at gallery openings on campus where her husband, a musician, would provide the music and she would showcase her latest jewelry designs.

“People were buying stuff and that’s when it all kind of gelled,” DaRin says. “I realized I could make money doing it.”

Recently, cast bronze has become a larger part of her work, in addition to copper. One of her latest mediums involves a newly acquired machine that enables her to sew leather to make handbags.

“My work is always evolving,” DaRin says  “I like that my work evolves around the elements: metal is from the earth, air to feed the fire for my torch and water to cool everything down.”