Will Nevins-Alderfer: A Metalsmith Captivated by Copper 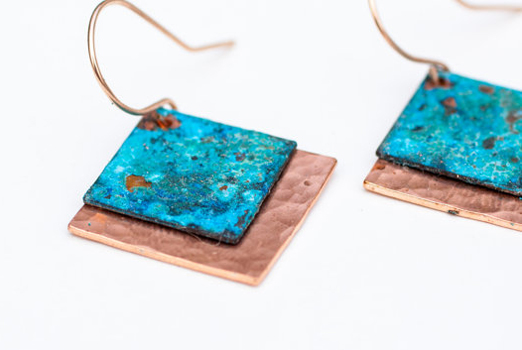 Will Nevins-Alderfer works in his studio located in Brattleboro, Vermont.

Photograph courtesy of Will Nevins-Alderfer.

Artist Will Nevins-Alderfer was intrigued by the effects of copper early on after his Metalsmithing professor at Earlham College taught him about Mokume-gane, a hollowware made using an ancient Japanese fusing technique.

“That translates into wood-grain metal,” Nevins-Alderfer recalls. “You stack up 25 layers of metal and then they are fused together in a kiln and then you basically twist that or carve into it or hammer it and all of that imparts different textures into the metal or ‘billet’ as they call it.”

Nevins-Alderfer usually preforms the billets and then works with them to pattern and design the texture before hand-hammering the piece he’s working on.

“I use a torch in the studio to heat it and then I hammer it once it’s soft,” he says.

In addition to holloware, Nevins-Alderfer applies the same technique to jewelry.

“Often I use a lot of copper and silver in my jewelry and add different elements of Mokume-gane into them to create different design features and design elements,” he says.

Nevins-Alderfer, the owner of Will Alderfer Metalarts, specializing in fine jewelry and artisanal rings, has found he is one of the few artists or designers in the United States using this technique.

“It is super unique,” he says. “There is one other guy in Maine I’ve noticed and a few others on the West Coast.”

The original use for Mokume-gane wasn’t centered on jewelry or hollowware.

“It used to be used on the Samurai swords to decorate and ornament the swords,” he says.

Nevins-Alderfer’s attraction to copper had to do with its low cost in comparison to other metals. 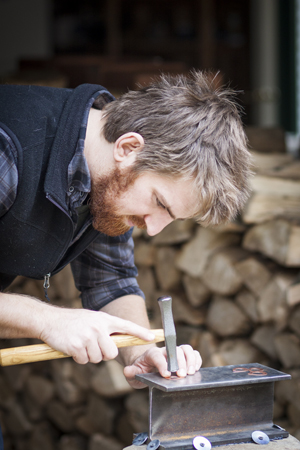 Will Nevins-Alderfer works in his studio located in Brattleboro, Vermont.

Photograph courtesy of Will Nevins-Alderfer.

“I started using copper when I was making jewelry for myself,” Nevins-Alderfer says. “Mostly it was a lot cheaper than silver and gold, so I could play with a lot of textures and designs without having to worry about cost and selling it immediately.”

Nevins-Alderfer makes a series of ginkgo leaf jewelry pieces that are made using new gold, a copper alloy made of copper and zinc.

“I cut out the general form of the metal and I use the cross pein hammer that has a flat edge and then I basically hammer in all of the texture of the leaf,” he says. “From handling the metal, you get undulations and the organic forms of the leaf by hammering it.”

As Nevins-Alderfer continued working with copper, he started to develop a deeper relationship, and was intrigued by the patina process. Nevins-Alderfer develops his patinas in small batches, grouping specific types of jewelry together at the same time.

“I use different chemicals, like household ammonia and vinegar and saw dust and things like that,” he says. “Those kind of speed up the natural weathering process in different ways so you can get these really rich blues and deep greens.”

He then lets the copper pieces sit in the chemicals overnight.

When an artist friend apprenticed with him last year, Nevins-Alderfer showed him the processes he uses to play with copper and the patinas. During that time, they created a new, one-of-a-kind turquoise color.

“Somehow we discovered this new coloration of patina that we haven’t gotten before,” Nevins-Alderfer says. “I’m in the process of isolating the recipe of patina so we can figure out how to replicate that color. I’m excited to mimic the process again and again.”

Nevins-Alderfer is also drawn to the flexibility and ease of working with copper.

“I love how malleable it can be, but yet it will stay in the shape you make it,” he says. “The more you work with it, the harder it gets. I love that warm, earthy, brown tone.”

Photgraph courtesy of Will Alderfer.

Prior to starting his metalworks business, Nevins-Alderfer worked at a fine arts bronze foundry in Fredericksburg, Virginia and another, New England Sculpture Service, located outside of Boston, Massachusetts. When he branched off on his own, wedding rings were the initial focus of his business.

“It is kind of amazing that even in a simple little ring you can have so much character in design and feel of the aesthetic,” Nevins-Alderfer says. “I enjoy the fine craft side of the spectrum. It has a function and has some kind of utilitarian purpose. The beauty comes out of the craft and the handmade side – not the hugely conceptual side of expression.”

Today, Nevins-Alderfer, along with his wife, Rosie and five-month-old son, Finn, lives in Brattleboro, Vermont. His metal studio is located about five miles from his home in what used to be a cotton mill.

“It’s a huge warehouse of artists and offices and some food producers,” he says. “It’s a studio space, but there are lots of businesses and artists to talk and collaborate with.”

One collaboration with a local family business in Brattleboro involved working with a chocolatier to create some Valentine’s Day-themed jewelry.

“We did gift boxes with chocolates and jewelry in them,” he says. “We did a whole line of copper and silver hearts and necklaces and earrings.”

The finish he used was pink on copper.

“There are a couple of ways I do finishes for copper,” he says. “One is to oxidize it by dipping it in liver of sulfur. It is basically a mild, sulfur bath and that will blacken the copper in sanding and then you can sand back any high points you have. It makes all of the black patina stay and the texture pops. I’m usually creating texture first and then sand back the high points and that brings back the pink. You can’t remove the oxidation from inside, so that stays.”

Instead of high polishing the copper, he smoothes it with sandpaper to achieve the natural color of copper. 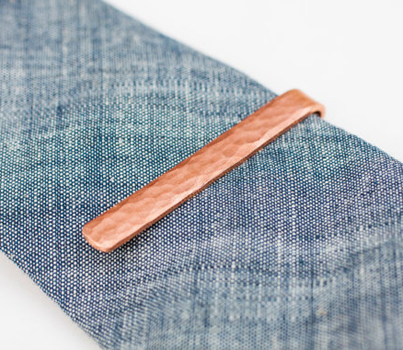 Photograph courtsey of Will Alderfer.

“I rub a beeswax olive oil mix I’ve done so that kind of seals the surface so it doesn’t get exposed to the elements and oxidize,” he said. “It kind of controls the color a little bit more and creates a matted look.”

Sometimes he leaves it unwaxed.

“It will just slowly turn browner and browner and get that great earth tone that lots of copper is,” he says.

Nevins-Alderfer offers pieces in his line that appeal to Brattleboro’s diverse community.

“Not everyone likes to wear earrings and necklaces so I try to do a lot of gender neutral jewelry like tie bars, cufflinks and bracelets,” he says.

“Right now, I have a couple of rose gold rings I’m doing,” he says. “One of my favorite Mokume recipes is white gold, rose gold and silver.”

Nevins-Alderfer prefers not to sell his custom rings through galleries and stores.

“I find it better to be able to work with people one-on-one and form that connection,” he says. “That personal connection is important to me and I feel like that is lost in a gallery setting. It is such an honor to make something for them they are hopefully going to wear for the rest of their lives.”

In addition to making jewelry and hollowware center on copper, over the years Nevins-Alderfer has also enjoyed the process of creating copper forms that involve the actual tearing of the metal. The forms are intended for display on a wall.

“You are expanding the forms past their breaking point so they tear and rupture, revealing different layers of things rupturing out of them,” he says. “I patina the layers of the forms.”

“It started at Kimberton from a copper candlestick project we did and mostly blacksmithing that I did in 9th grade and then as my senior project,” he says. “I apprenticed with a blacksmith in town so he and I worked together for a year or two and I learned all about it.”

Later, in 2007, Nevins-Alderfer was reunited with copper through his metals professor at Earlham College, where he was a double major of fine arts with a focus on metals and also human development and social relations.

“I mentored under him and took all of his classes and some independent studies,” he says. “He was a silversmith and did a lot of copper vessels.”

Lately, he has been doing more castings in collaboration with Sincere Metal Works in Boston, Massachusetts.

“We basically cast anything in copper and bronze,” he says. “I do a process called organic casting where you take physical objects and you actually burn out the organic matter and then pour bronze and copper into where those shapes are. I did that with our wedding flowers.”

Nevins-Alderfer also has his sights set on using the process to make jewelry.

“I started playing with blueberries, leaves and ferns,” he says. “I want to do a whole organic burnout jewelry line.”