By utilizing copper as the primary exterior envelope cladding at this prominent urban corner site, the CODO 241 mixed-use redevelopment is both architecturally distinctive and respectful of the surrounding downtown historic environment: the three-story addition approximates the footprint of several buildings demolished in the early days of York City's urban redevelopment, thereby recreating the prominent corner building massing.

Reflecting the care historically taken on many early-twentieth-century midrise mercantile buildings in Northeastern cities, CODO 241's massing is broken into smaller pieces to fit into the scale of its environment. Located across from a minor league baseball stadium, the $12 million CODO 241 mixed-use redevelopment project is an important benchmark in York, Pennsylvania's downtown renaissance. Named for the local Codorus Creek which bisects the City, the 69,500-square-foot CODO 241 blends the sensitive adaptive reuse of an early-twentieth-century historic mercantile building with a striking three-level, copper-clad addition catering to local consumers' desire for quality downtown residential offerings.

Merging "old" and "new" through its blending of copper, glass and other metal fabrications that inject a progressive, modern feel complementary of the existing industrial environment, the building includes lofts, flats and loft-townhomes, as well as a corner bistro and LEED Certified commercial office space.

In revising a plan which originally included corrugated steel siding-deemed overly harsh-to reflect the Codorus corridor's industrial flavor, the team elected instead to outfit the signature corner of the building located at a key city gateway in copper cladding. The copper offers a richer color than raw steel while maintaining metal's industrial attitude. Developed in collaboration with a local custom sheet metal contractor, this copper cladding was chemically patinated prior to installation to provide a visually interesting amalgam of colors, shades, shadows and textures-and then sealed with linseed oil to avoid further aging.

No two panels are exactly alike-creating a warm tapestry of color variations and modeling which change in appearance depending on the time of day and degree of direct sunlight or shade. The panels were installed with a flat lock seam in a vertically repeating cladding pattern of a single 2' square row followed by two rows of 2' x 1'-sized sheets in a running bond pattern.

The architects worked directly with the sheet metal contractor to develop elegant details at all corners and apartment window openings to maintain the integrity of both the copper and the building envelope. This singular cladding of copper has become a hallmark of the CODO apartment brand, with the motif carrying over into the subsequent CODO 28 mixed-use development located only blocks away from the original CODO 241 site. 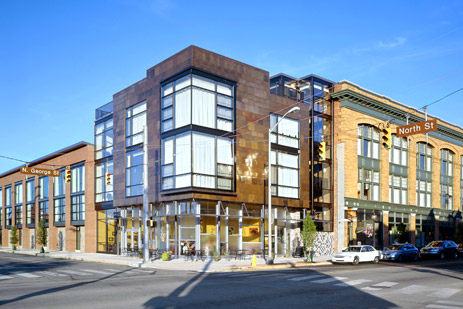 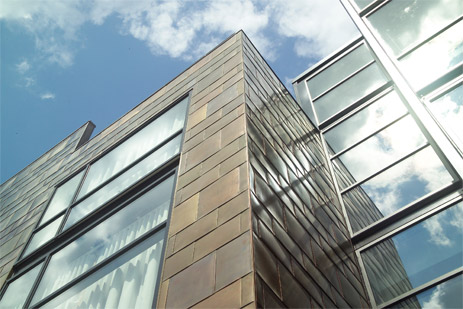 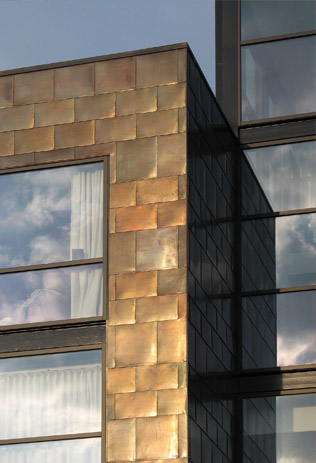 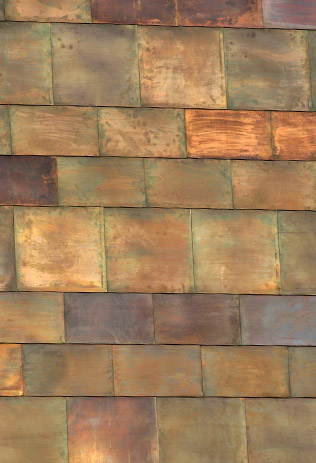 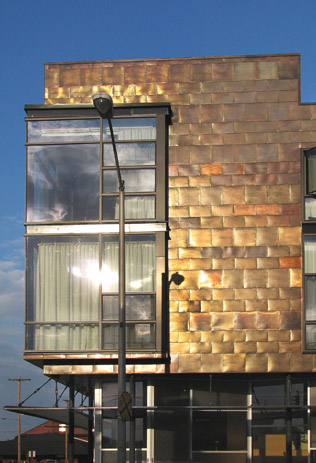 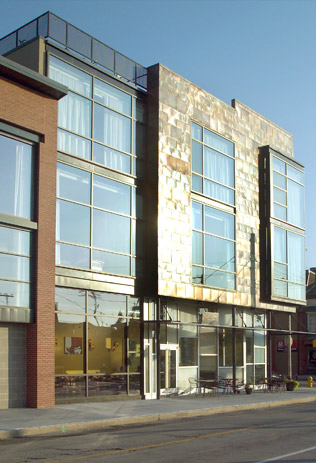