The original copper dome of the Maine State House served the building for more than a century; however it was recently restored to bring it back to its grandeur.  The Maine State House in Augusta was originally designed by renowned architect Charles Bulfinch in 1832. The dome was added in 1910 as the result of a major remodeling and expansion project that ultimately established the current appearance of the building based on designs by G. Henri Desmond. The original façade was preserved during remodeling, though the length of the building was doubled to 300 feet (92m) by extending the north and south wings. In order to be proportional with the larger building, a new, much higher copper-covered dome was built to replace the original cupola, rising to a height of 185 feet (56m) and topped by a gold-clad copper statue designed by W. Clark Noble of Gardiner, called “Lady Wisdom.” Over time, weather damage and holes caused by hail strikes on the top of the dome caused leaks in the building. The seams between the copper sheets also caused problems for the underlying steel and concrete structure of the dome. This was the first replacement of the 100-year old copper dome, completed by Consigli Construction Co., Inc. in collaboration with The Heritage Co., EverGreene Architectural Arts, E.S. Boulos Company and ACE Corporation. The work included the installation of expansion joints, repairs to prevent water infiltration and restoration of the cupola (located between the top of the dome and Lady Wisdom) using a highly durable paint system. Lighting upgrades, copper repairs and the restoration of the gilded Lady Wisdom statue located atop the dome were also part of the project. The dome’s structural system and framing were analyzed by Becker Structural Engineering—one year in advance of dome construction—so that Consigli could create a 3-D model staging plan to be subsequently engineered to eliminate interior shoring. Working 200 feet (60m) in the air on elaborate staging, carpenters, coppersmiths, engineers and other construction workers replaced more than 7,000 square-feet (650 sq. m) of copper on the dome. The existing unique, curved copper components were carefully removed and saved to serve as models for the new components. A full sheet metal shop — consisting of an 8’ brake, 52” jump shear and benches — was set up on site at the 63’ (19m) elevation mark, along with five cases of 20-oz. copper. Each copper component was carefully measured, cut and bent on site, and then installed. The compound curving components were made in Heritage’s “home” shop, using a shrinker/stretcher machine and an English wheel, then by hand-forming the copper over the custom-made wood forms. Care was taken to exactly match the size and configuration of the existing components. Care was also taken to exactly match the seam layouts that were prevalent in the original copper work. The copper was manufactured by Revere Copper, of Rome, New York, and supplied by Beacon Sales Company of Lewiston, Maine. Approximately 12,880 lbs. (5850kg) of 20-oz. copper in 3’ x 8’ and 2’ x 8’ sheets were used. Approximately 15-18 percent of that copper was cut-off waste due to the curved nature of many of the components. The waste was then cut up and made into copper clip stock for the roof installation, or scrapped for recycling. Overall, this project restored of one of Maine’s most significant historic landmark buildings, returning its signature copper dome and gilded Lady Wisdom sculpture to their original intended conditions for many more years to come. 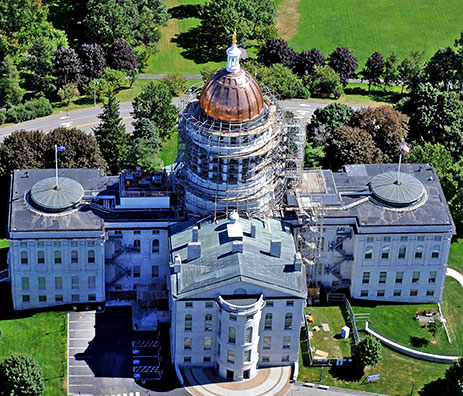 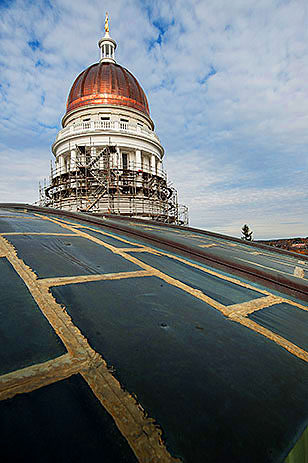 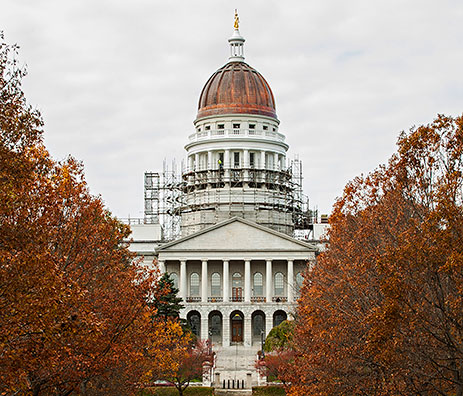 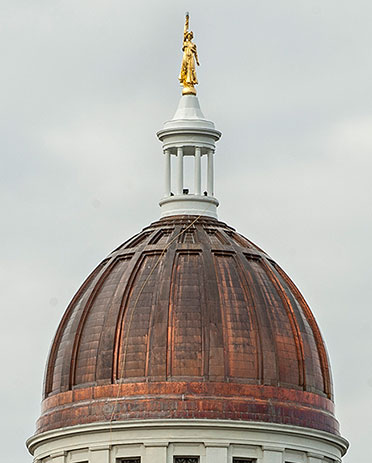 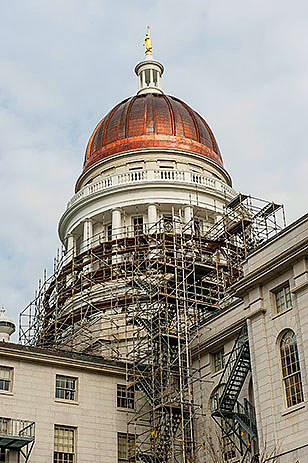 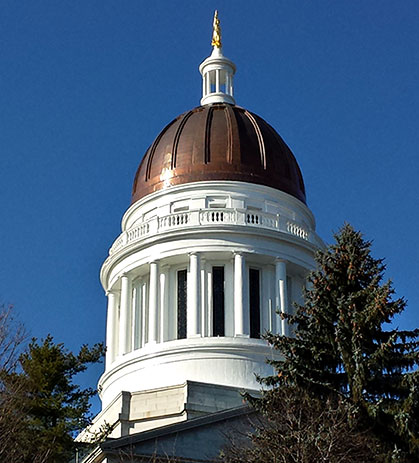