The Kansas Statehouse is a prominent feature of the downtown Topeka skyline. Standing at 306 feet (93m), the capitol has captured the attention of citizens and visitors alike for more than 100 years. However it’s the intricate copper detail inside the inner dome that demonstrates the craftsmanship of this historic government landmark. Built in three distinct phases over a 37-year period, the capitol’s east (c1869) and west (c1881) wings of the cruciform plan were constructed as free standing buildings; the central building  (including the dome, rotunda, and north and south wings), was added between 1884 and 1903. The capitol displays exquisite decorative metal work throughout the building, of which the inner dome’s copper metal work is a prime example. The underside of the inner dome is comprised of cast iron columns with sheet metal paneled bases and Ionic capitals evenly spaced around the rotunda’s circumference. An ornamental wrought iron metal railing fills the spaces and creates a grille work between the columns. Eight round arch head windows are evenly spaced around the rotunda wall at the walkway running behind the inner dome that create light and reflectance off the copper sheet metal.

Copper sheet is used for the formed segmental arches that span from column to column and have pressed ornamentation at the spandrels. These arches and columns support a copper sheet metal cornice with dentil molding, and above the columns is decorative copper sheet metal encapsulating the structural ribs forming the interior dome. The bottom panel of the dome is painted with a garland motif, and above that are translucent panels that illuminate the rotunda below. The original finish on the inner dome’s historic metal work was obscured by overlays of smoke, patina, graffiti and dirt. Over time, the sheet metal’s original wax finish deteriorated and the normal patination process occurred, thus the copper turned to a dark brown finish. To access the work area, scaffolding was erected within the rotunda starting at the first level and ended in a dance floor platform at the base of the inner dome. Portable scaffolding was used by craftsmen to reach the inner dome from the dance floor platform. Great care was taken during the restoration to protect the existing copper as well as the adjoining glass and nearby artwork. Before the work began, Stuart Dean’s craftsmen covered nearby glass, art and other metals with protective materials. In addition, a controlled environment was created to prevent contaminants such as masonry dust and humidity from interfering with the restoration. Restoring the historic copper required a process of stripping, cleaning, tinting and testing. Removal of the historic finishes had to be completed in a manner to avoid damaging the copper surfaces, as scratches could cause issues during the replacement of the finishes. Some areas, such as the column capitals, were painted over, while others maintained their 100-year-old varnishes. Paint remover, acetone and denatured alcohol were used to strip down to the bare copper. Once stripped, corrosive conditions were mitigated; failed anchorage such as wire ties, hems and soldered straps were repaired; ferrous fasteners were replaced with appropriate and non-corrosive ones; and the metals were cleaned in preparation for the final finish. The cleaning alone took 6,000 man hours. With the stripping and cleaning complete, the copper had a brand-new appearance. To provide a “10-year aged look,” tinted lacquer was applied. First a darker tinted lacquer was air brushed into the recesses and reveals of the details to provide a pronounced appearance. Then a lighter tinted lacquer was sprayed on the remaining areas to provide a uniform finish. Finally, approximately 6-8 layers of clear lacquer were applied to provide the protection coat and thus complete the finishing. Over 75 gallons (280 L) of lacquer were used to finish the inner dome restoration. Because the intended life of the new finish was 50 years, a continuity testing apparatus (a void or holiday detector) was used to verify the final lacquer finish integrity with an absolute minimum of pinholes and penetrations and a minimum uniform 1 mil thickness. Of special note, during this phase of the restoration was the work to the apex of the dome. It features a copper repousse capital and acorn shape with acanthus leaves. An issue with the structural steel forming the acorn shape was identified during the project. Water and dust collected and was trapped on the top side of the inner dome within the structure causing deterioration and rusting of the steel and therefore, loosening the acanthus leaf components. Upon further inspection, the remaining steel profile was deemed adequate after corrosion was removed and the raw steel was finished to prevent further deterioration. The Kansas Statehouse was listed on the National Register of Historic Places in 1971. To comply with the Secretary of the Interior’s Standards for Rehabilitation, the copper repairs on the inner dome were completed in a manner to restore the historic appearance. The Kansas Statehouse preservation and restoration project was completed in January 2014. 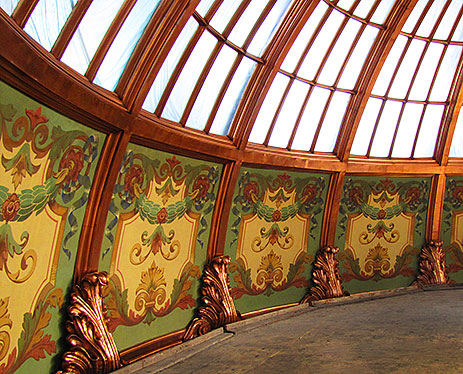 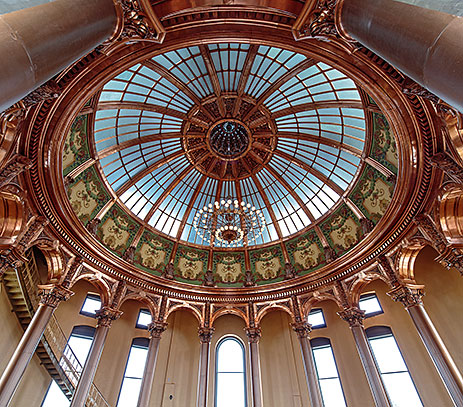 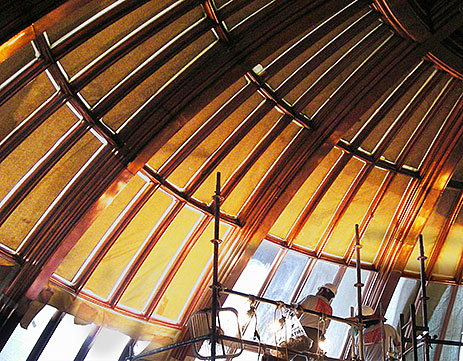 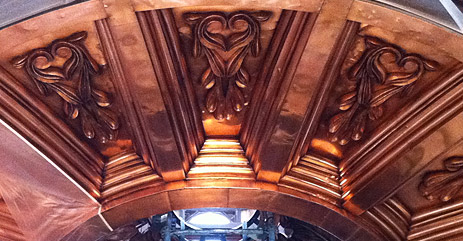 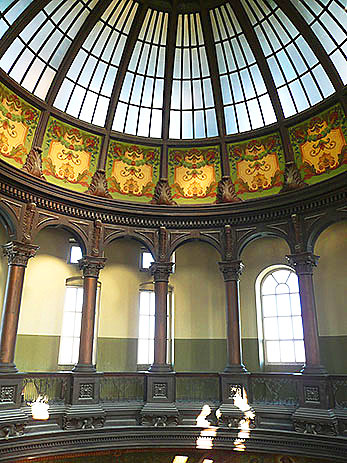