The Kansas Statehouse’s patented copper dome, contrasted by the limestone structure, has captured the attention of citizens and visitors alike for more than 100 years. Built in three distinct phases over a 37-year period, the Kansas Statehouse reflects the changes in construction between the 1860s and the turn of the 20th century.  The $22 million copper roof and dome replacement, completed in late December of 2013, occurred over previously restored, occupied spaces and utilized approximately 127,000 pounds of copper.  The east and west wing roofs are covered with 24,700-square feet of 20-ounce copper batten seam roofing. The central, north and south wing roofs are finished with a hybrid horizontal and standing seam roof constructed of 20-ounce copper to replicate the historic roof.

Planning for the Statehouse’s restoration began in 1999 with an overall evaluation of the building and schematic design. In order for the legislature to continuously occupy the building, the construction of the Statehouse was broken into six major phases and 29 separate bid packages. As part of the statehouse preservation and restoration, Treanor Architects completed a study on the existing roof and dome systems between 2007 and 2010, and concluded that the entire copper cladding needed to be replaced. Because of its longevity, copper proved to be the best long-term value for the project when other cost factors, such as access, associated repairs and maintenance, were taken into consideration.

To comply with the Secretary of the Interior’s Standards for Rehabilitation, the replacement copper design had to replicate the historic construction as closely as possible. However, areas identified as leak prone or lacking in provision for thermal expansion were targeted for changes to better protect the building in the future. The design included repairs for substrate damaged by infiltration and alterations to the substrate to accommodate copper detail changes. The original copper installations lacked underlayment. In order to minimize changes in the manner that the roof envelope behaves, breathable underlayment was used to the greatest extent possible.

Approximately 127,000 pounds of copper were recycled and portions of the copper were salvaged for re-use in the Kansas Statehouse’s new visitor center. MG McGrath, Inc. performed the fabrication and installation of 65,250-square feet of sheet metal on the roof. Low slope areas of the central roof, which were originally clad with standing seam, were re-clad with 20-ounce soldered flat seam copper to provide a more water-tight roof. In order to meet the aggressive schedule, roofs were sequenced to allow for tear off and substrate repairs to occur while sheet metal installation crews worked on another roof.

Deteriorated substrate required repairing structural framing as well as the wood and masonry decks.  Work on the 21,300-square foot dome was performed by Baker Roofing, with custom fabrication of the ornamental trim and windows performed by Ornametals.  A 365-foot tall, free-standing tower crane was used to deliver materials and equipment. Crews worked in a spiraling pattern from the bottom of the dome up to sequence tear-off, substrate repairs and sheet metal installation.

Standing seam 20-ounce copper cladding was used for radius components at the base and top of the dome. The distinctive horizontal seamed panels used in the original construction were replicated in 20-ounce copper; and templates were created for each panel to account for differences in the compound curvature and spacing of the attachment points. In total, the dome required 230-linear feet of built-in monumental gutter constructed from 32-ounce copper and 752-linear feet of 24-ounce copper rib molding. 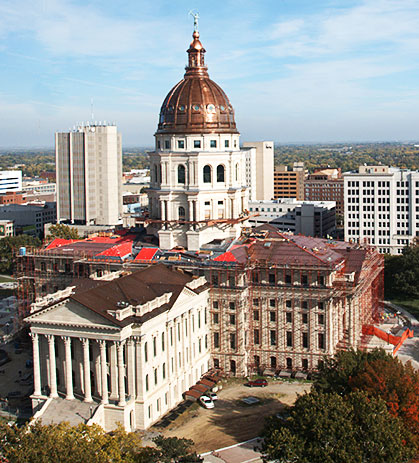 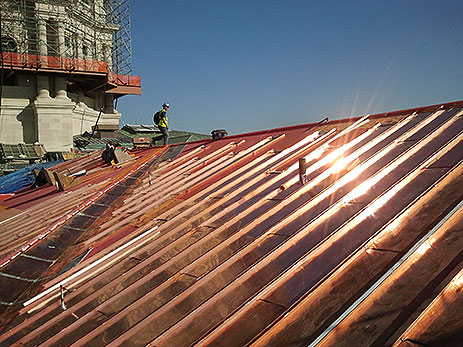 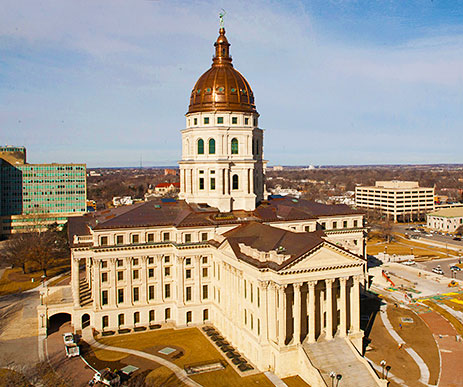 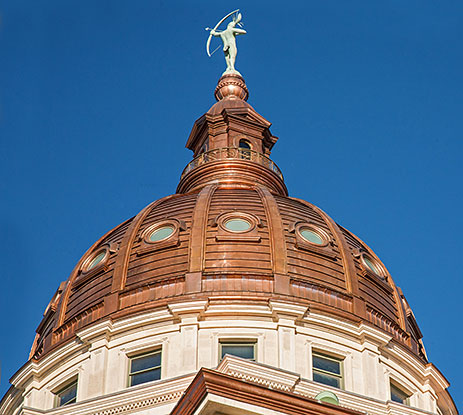 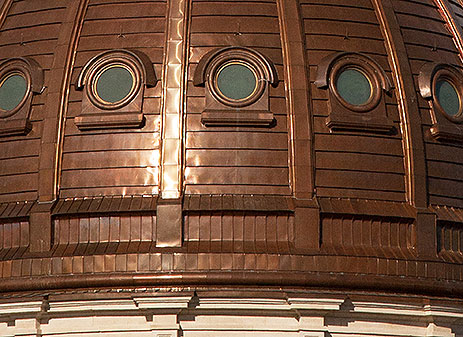 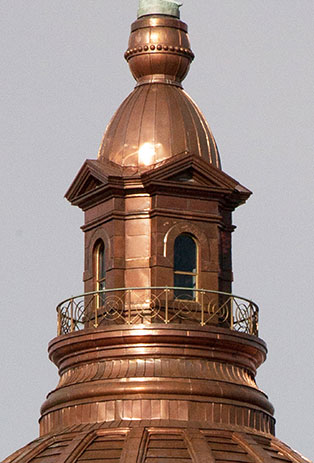 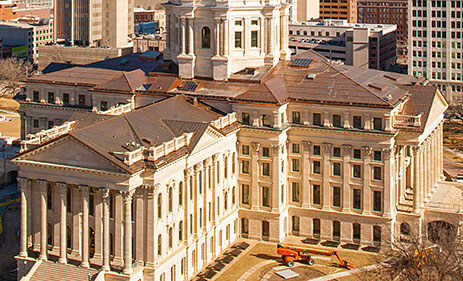 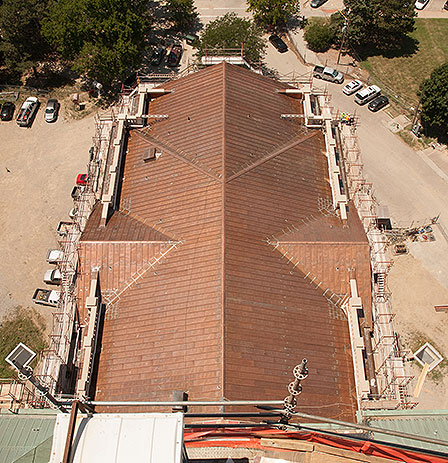 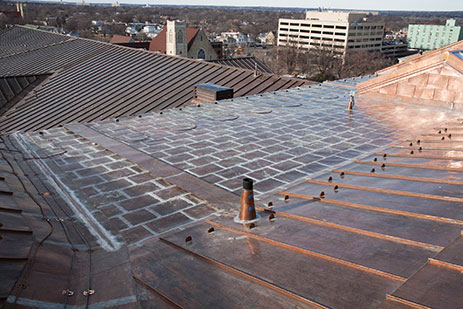 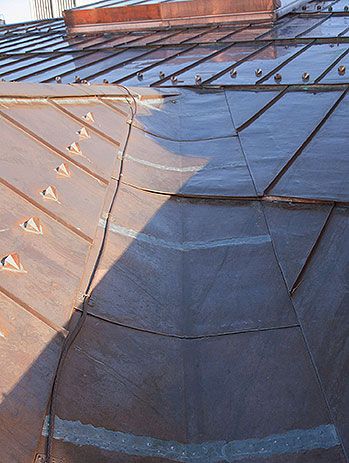 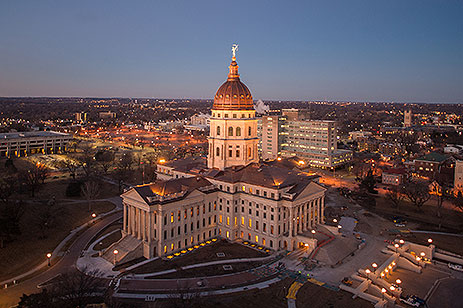