Utilizing 440 individual pieces of 16-ounce copper, the new Frank Lloyd Wright Filing Station, inspired from the renowned architect’s sketches from the 1920’s, now holds a place in the rich architectural history of Buffalo, NY. The city is decorated with numerous masterpieces from the late 19th and early 20th centuries, including multiple structures designed by Frank Lloyd Wright including: a six-building residential complex, a lakeside vacation house, several private homes and an administration building that was torn down in the 1950’s. Adding not only to Buffalo’s history, but to Wright’s legacy, is the recently-completed Filling Station, which is housed in a 38,000-square foot addition of the Pierce-Arrow Buffalo Transportation Museum. The 1,600-square foot building measures approximately 40 feet by 40 feet.

Having discovered Wright’s sketches from 1927 during the 1970’s, the museum’s founder and executive director, James T. Sandoro, has spent more than 40 years tirelessly researching, prototyping, fundraising and, finally, overseeing its’ construction. Sandoro engaged Buffalo-based Lauer-Manguso & Associates as the project architects, leveraging the expertise of Frank Lloyd Wright aficionado, Patrick Mahoney, to help impeccably fulfill the building’s final vision. Copper is strongly incorporated into the building’s layout, starting with the expansive standing seam roof. Every 16-ounce, 15-by-1-inch, double-locked seam panel was individually shop-fabricated, as intended in Wright’s original design. The museum’s east side is almost entirely glass, flooding the structure in natural light that radiates the shine and beauty of the copper finish.  Mahoney used specific designs within the copper details to bring out the qualities of the material.  In particular, the ridge detail was unusual in that it was designed to eliminate any seams and folded over the full sheet.  Lastly, the pattern/seams on the totems were also designed with copper in mind.

The museum’s second-story balcony wraps three sides of the filing station, producing a unique view from every vantage point. Equally impressive is the copper edge and underside of the cantilevered canopies. Measuring 24 inches wide, the copper fascia transitions to an angled soffit and screen vent. The assembly consists of five pieces and provides a stunning compliment to the red clay stucco ceiling and walls. Much heavier 0.5-by-4-inch copper plate was utilized in the capital columns. Individual pieces were saw-cut and assembled with pop rivets on their concealed backside. The motif of the columns blends eloquently into the adjoining patterned red concrete walls. The hanging gravity gas pumps are also made of copper. The underlying units were constructed with wood and glass; 16-ounce copper bands were skinned onto the wood to designate the gallons of fluid left in the pumps.

The most noteworthy elements of the station are the imposing twin-copper totems. With a nod to Native American design, the twin 40-foot high spires support an abstractly lettered “TYDOL” in red, neon-like LED lighting (Tydol Oil Company was a popular brand at the time and intended benefactor of Wright’s blueprints). The totems are actually obelisks—four-sided columns that become incrementally narrower until culminating in a pointed pyramid. Grove Roofing Sheet Metal Superintendent Rich Foley, a forty-plus year industry veteran, began his involvement in the project not long after Sandoro’s purchase of the building rights in 2001. All the copper used for the project was donated by Utica-based Revere Copper Products Inc. 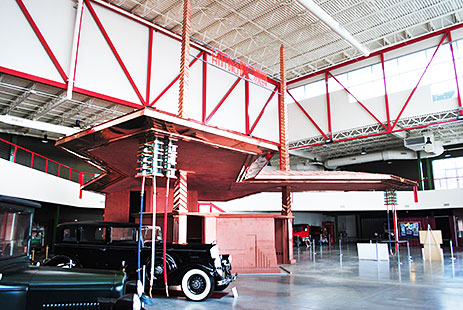 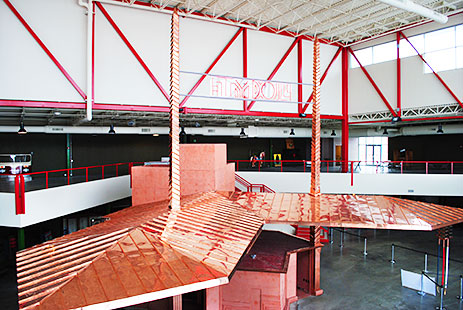 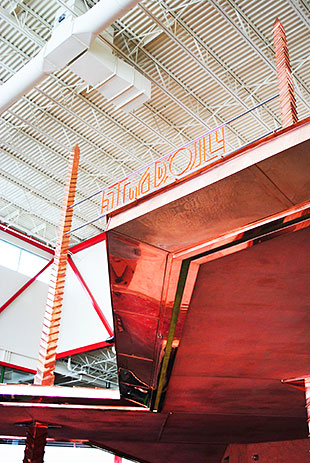 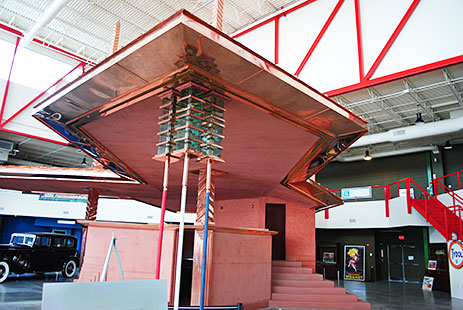 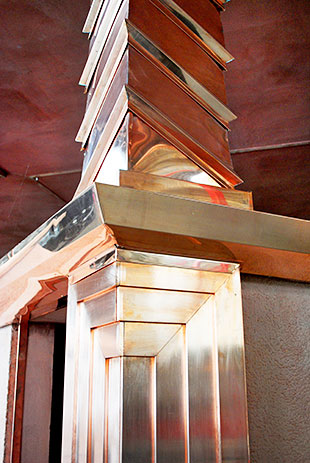 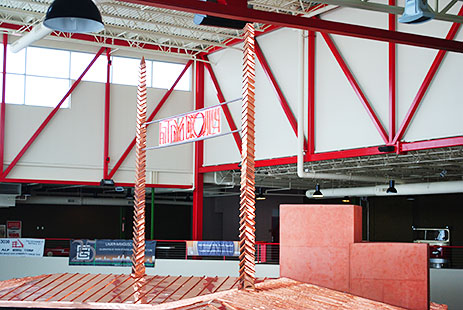 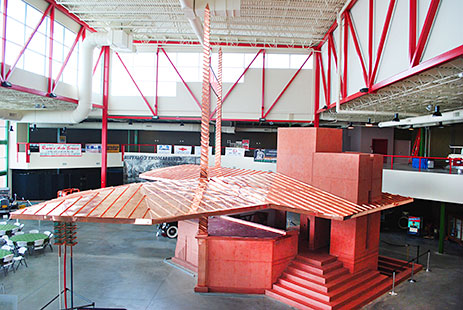