When it came time to restore the copper domes on the Basilica of St. Adalbert, there really was no substitute. Copper had not only proven to be durable and long lasting ― having endured a century of harsh Michigan weather ― but visually aesthetic and architecturally significant for the time. Serving a rapidly-growing Polish Catholic immigrant population, the St. Adalbert church was constructed in 1907. In recognition of the parish's outstanding commitment to preserving its presence in the original neighborhood and its service to the larger Grand Rapids community, the Roman Catholic Church was given the designation of Minor Basilica in 1980. To this day, it remains one of the few basilicas in North America and the only one in the state of Michigan.

Prominently located at the intersection of two major highways in downtown Grand Rapids, the Basilica is an iconic Romanesque-Revival structure built of Sandusky limestone and roofed with red-clay Spanish tiles. Among the building's most distinctive features are its three large copper-clad domes, rising 150 feet above the city skyline. The copper material on the domes had survived the end of its natural lifecycle and was in need of renovation or replacement.

The parish of St. Adalbert worked tirelessly to raise the necessary funds through a campaign entitled, "Restore the Glory." It was important to the parish that the dome's original character and copper appearance be maintained, and that synthetic or substitute materials not be used for the restoration project. To achieve this, Grand River Builders of Grand Rapids was contracted to remove the original architectural copper, and fabricate and install identically-matching copper elements on all three domes.

Using a custom mold made from one of the original copper shingles, W.F. Norman Corporation of Nevada, Missouri, stamped hundreds of Spanish tile-style copper shingles for the 18,000 square feet of dome roof surface. After removing the existing copper shingles and repairing the original wooden roof deck, Grand River Builders craftsmen secured each new shingle with copper nails, rivets and clips. To match the rising curves of the eight-sided domes, shingles had to be individually marked, cut, fastened and soldered to hundreds of handmade copper hip caps. Lower flat roofs were also replaced. The ornate cornices surrounding all three domes were carefully removed.

Their unique profiles were measured, hand-crafted and re-fabricated from 16-ounce sheet copper at the Grand River Builders workshop before being fastened and fully soldered onsite. The eight-columned cupola and bell tower lanterns were each removed intact with a crane, disassembled, and rebuilt before being reinstalled at the Basilica. As with the cornices and hip caps, each copper element of the cupola and lanterns was recreated by hand to identically match the original in material, shape and proportion. Grand River Builders craftsmen fabricated each element with hand-operated brakes, sheers, rollers, and soldered them over hand-built forms. The numerous spherical elements on the column bases were spun by hand from 24-ounce copper over custom-built wooden forms on an engine lathe. The ornate column capitals were also stamped in copper by W.F. Norman using a custom-made mold.

Finally, the copper bell tower crosses were rebuilt and gilded in shimmering 24-carat gold leaf. The original main dome cross, also made of copper, was still in good condition and was accordingly cleaned, repaired, re-gilded and reinstalled. Due to its significant historic nature, all of the work performed on the Basilica, was completed to the Historic Preservation Standards of the Secretary of the Interior. 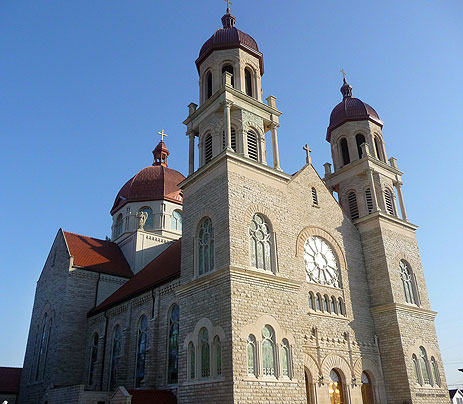 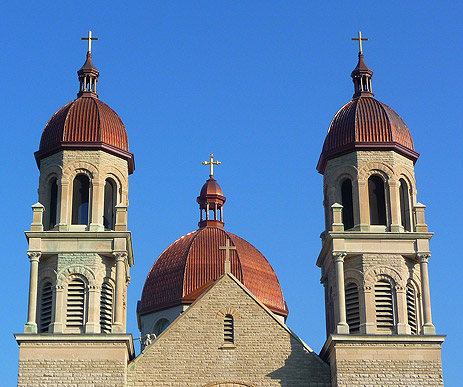 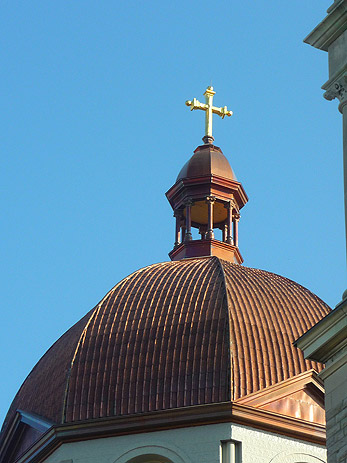 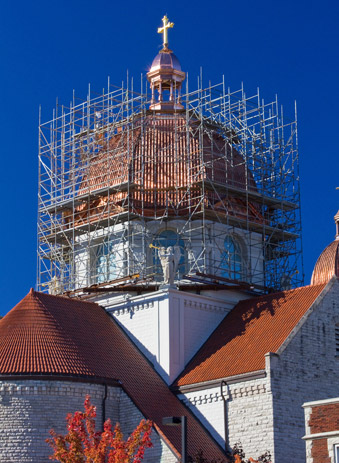 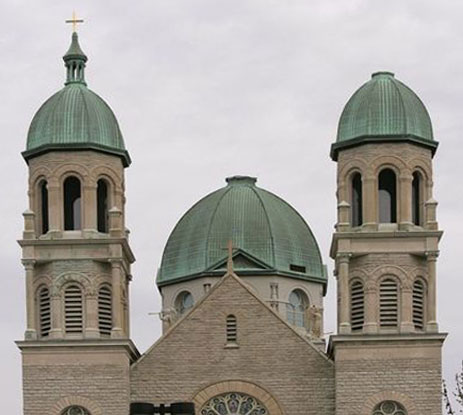