The Glendale Community College Life Science Building is a 63,000 square-foot facility with state-of-the-art laboratories and classrooms for instruction in biology, psychology, and nursing. The building was the first designed after the adoption of a restructured master plan calling for a focus on densification. This focus led to the development of a larger facility housing multiple departments. Accordingly, the project was faced with architectural challenges associated with density, context, and scale, for which architectural copper became a solution. As the first three-story structure on campus, the Life Science Building presented an interesting contextual problem. Without specific precedents from which to draw, the project needed to simultaneously recognize the existing campus while becoming a model for future development. Recent building additions to the campus introduced a variety of metals to the original material palette of clay masonry and painted concrete. The design team embraced metal paneling as an approach for its economy and flexibility. Copper offered a local material that would resonate with the desert location, and compliment the colors and textures of the campus. The design team analyzed the campus buildings to understand their fundamental geometric rhythms and patterns. The studies showed a regular cadence of columns, windows, and reveals, juxtaposed against fields of masonry and corrugated metal panels. The interplay between vertical and small scale horizontal lines on the existing buildings began to inform the direction for arranging copper panels on the Life Science Building's façades. Collaborating with the metal fabricator, the design team developed a kit-of-parts using standard panel profiles. Working within the constraints of the fabricating process, we determined the variables that could be used to bring more diversity to the system. The manipulation of panel length, coupled with variegated copper fin lengths between panels, enabled three panel profiles to provide considerable design permutations. The sun's incident rays informed the textural distribution of the copper components. On the north façade, where direct sunlight is minimal, the copper panels present a smooth appearance. The north stair tower, representing the single moment where copper panels meet the ground, became the genesis for the textural gradation. As one moves around the building from the highly glazed north façade to the sun-drenched south façade, the copper components transition from smooth to highly articulated. The copper panel façades of Life Sciences behave as a living element in their own right. Left to patina naturally, the copper components provide a fitting architectural expression for this facility. The various widths and depths of the copper components create dynamic compositions of light and shadow. Through the changing patina and shadow patterns, nature's temporality is effectuated in the building's façades. 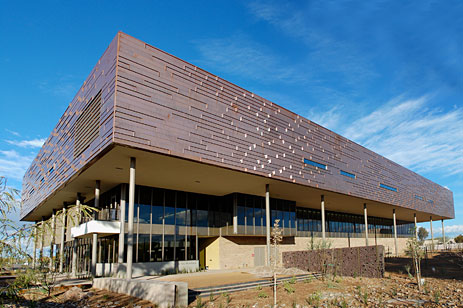 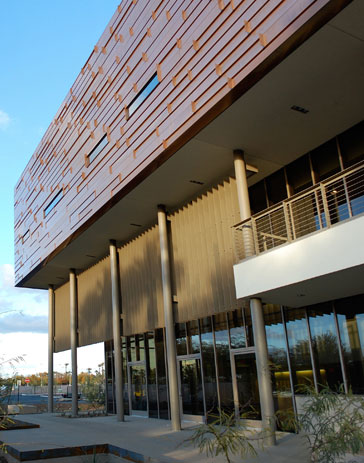 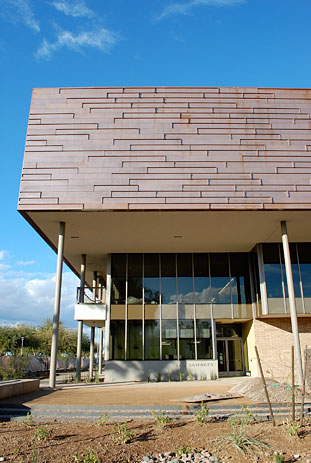 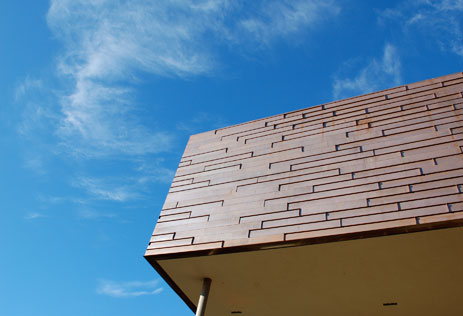 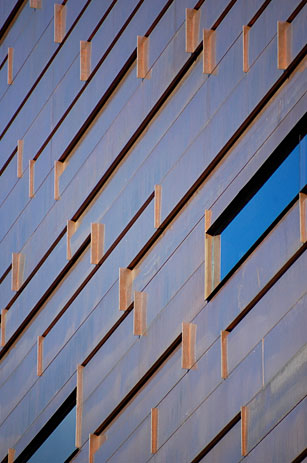 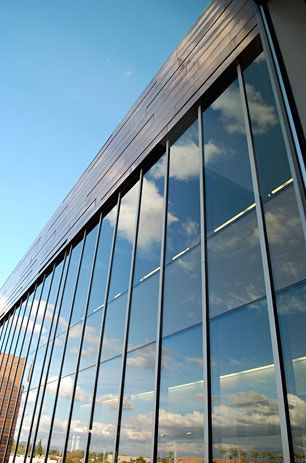